In the months following the Elephants 1958 gathering in Bad Durkheim, Ernst 'Klacks' Leverkus and his entourage sought to avoid a future winter motorcycling reunion becoming a disorganised mass meeting. The rally really needed to remain true to the spirit of that very first meeting held back in 1956.

At the time, Ernst Leverkus had outlined his vision for the rally in an article published in the magazine Motorrad:

"In the winter of 1956, some passionate 'Green Elephant' riders and I wanted to spend time with like-minded people willing to ride out together and experience the thrill and companionship of winter weather conditions.

We wondered what type of person would ride several hundred kilometres in harsh winter conditions on a big bike, only to end up sitting around a table in a bistro and talking shop? The kind that doesn't fear ice and the snow? No medals, no trophy, and maybe no place to sleep?

We were very curious as to who would turn up. Did these people still exist, or were we the last of the species?

It was with these questions in mind, that we arrived at the Glemseck hotel on the 7th of January, 1956, near the Solitude race track not far from Stuttgart."

The Kurhaus Glemseck hotel which hosted the 1956 Elefantentreffen

"I don't think any of us among the twenty or so bikers present that night had ever had such an intense evening. So who were the people who came to our rendezvous? No show-off bikers in fancy leather jackets, no sparkling motorcycles. There were more white hair and wrinkles in evidence than smooth young faces. Twenty bikers who had perhaps known more wind in their faces than some old sea dogs had ever experienced. It was at this very evening that we decided to organise a meeting every first Sunday of the year."

In an attempt to restrict the growing number of participants, from 20 in 1956 to more than 400 in 1958, Ernst Leverkus and his entourage decided not to promote the upcoming 1959 meeting, nor, more surprisingly, give out any information about the rally location. A discreet, niche advert was thought enough to attract a limited number of attendees.

The focal point for the 1959 rally was undecided. Ernst wanted to steer clear of any industrialised location or indeed any that were too easily accessible. He was half joking when he said he would like to find really out-of-the-way location. "Where the hares and foxes say good night to each other, perhaps the North Pole?"

Ernst Leverkus and his entourage spent several weeks researching the ideal place, but found nothing they could all agree on which seemed to fit the bill.

However, in a chance encounter, a certain Erich Becker, from Stadtoldendorf near Holzminden suggested to Klacks that his home town would be perfect. He even suggested taking charge of the entire job of organisation.

It seemed the perfect solution and Stadtoldendorf was chosen to host the rallyists of the 1959 Elefantentreffen.

We shouldn't forget all those anonymous volunteers

Although most of the honours go to Ernst Leverkus as the instigator of the most famous winter rally there is; we shouldn't forget all those anonymous volunteers, who through their passion, dedication and enthusiasm, undoubtedly proved vital in the organisation and successful implantation of the Elefantentreffen meetings of the 1950s.

Without their work, the Elefantentreffen may never have achieved the popularity and prestige that surrounds it today. A fact that 'Klacks' acknowledged in an article at the time:

"Every year there were plenty of people who helped. At the second gathering in 1957, it was the good Anschutz. In 1958, in Bad Durkheim, it was Dr. Baumann, Jakob Askani, Hans Franck and his friends. In 1959, in Stadtoldendorf, it was Erich Becker and the city inspector Herr Rose, and of course all those many volunteers, too numerous to mention by name."

The good Mayor of Stadtoldendorf

On 3 January 1959 the rallyists met for the fourth meeting of the Elephants.

The Mayor of Stadtoldendorf, Herr Noske, showed enormous hospitality in welcoming hundreds of motorcyclists from all over Germany who had braved the winter frost to reach his small town.

As 'Klacks' notes in his February 1959 article in Motorrad:

"Mayor Noske understood what the Elephants were all about. He provided a word of welcome, a speech in the evening, a farewell party and a meeting place. A safe haven from which those who revelled in the experience and freedom the motorcycle could bring, were able to discover the world in free expression, and simply feel the wind on their faces. This band of riders and free spirits who had become so rare that their once a year meeting was the single opportunity to experience the joys of companionship and brotherhood that united them.

The Mayor of Stadtoldendorf imposed no restrictions, nothing was forbidden, and there were no limits, he simply invited us, knowing that our creed was true and trusted" 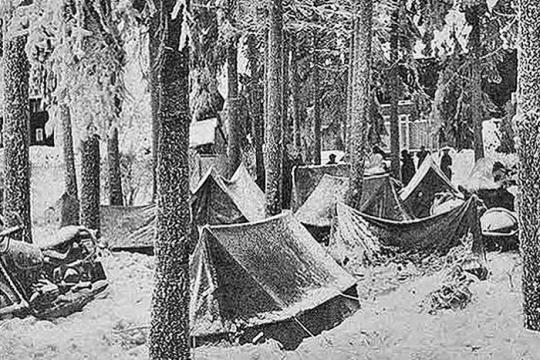 Camping in the snow at the 1959 Elefantentreffen

Between Christmas and New Year, many rallyists had arrived in the area to celebrate New Year and be there for the Elephants.

Rallyists and their machines at the Lindenhof Theatre

The rally venue in Stadtoldendorf was the Lindenhof Theatre and its adjacent small beer hall. These two rooms together could hold around 750 people, and in the event, both rooms were filled to capacity by rallyists. According to 'Klacks' there were 600 machines in the theatre car park and over 750 bikers.

Although 'Klacks' had wanted to reduce the number of bikers for the reunion of January 59, once again bikers had arrived in their droves. Despite this though everything went off calmly and without incident. As he wrote in his February 1959 piece:

"In Stadtoldendorf, there were no troubles, no motorcycle races in the streets, no complaints. The only two policemen present were sitting with us at the Lindenhof theatre and on the Sunday morning not an engine was heard before 9.30."