Flying Haggis Rally held in Tigh na Bruach in Argyll and Bute (some 50 miles north of Glasgow) ran for three years and well annoyed the locals.

We emptied the three local villages of beer!

I was the Secretary and my Hubby was one of the founder members - we were the Balloch Bears MCC. Met on a Wednesday at the Balloch Hotel and rode around the west coast of Scotland.

I designed the badge! We made the news as we took over the Dunoon ferry for a whole weekend on the second rally and emptied the three local villages of beer!

We put on a bus transfer to the town and had a great ceilidh night (that's Scottish drunken dancing for you foreigners), usual dizzy sticks, dancing and fun.

We had great fun with our new found friends from Ireland who rewrote the highway code and managed to get eight over on three bikes - they even chatted up the local plod.

Still both biking but tour about now. Not done a rally in years but ... who knows? 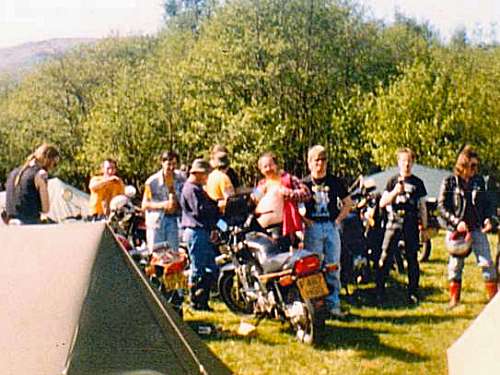 I was one of the original members. I designed the T‑shirts and flag. Attended 1st Flying Haggis on a windy mountain!

My husband Chas and I ran the last couple of Flying Haggis rallies. We have many happy memories of the Haggis Rally, in fact some of the people that we met at the Haggis Rally back then, we are still in contact with them, and we still do many rallies.

It would be good to hear from any former members from the Bears' days.

I was the Scottish Regional Rep for MAG UK and was a Balloch Bear when Chas and Alan and co were there.

Great memories of travelling to rallies with the Bears - 3 Sisters and the Flying Haggis - two of the highlights of my biking events. Had some great laughs and Chas was a diamond.

I'm no longer living in Scotland but will always cherish my years there and the fantastic people I met and worked with.

Without a doubt the best years of my life. 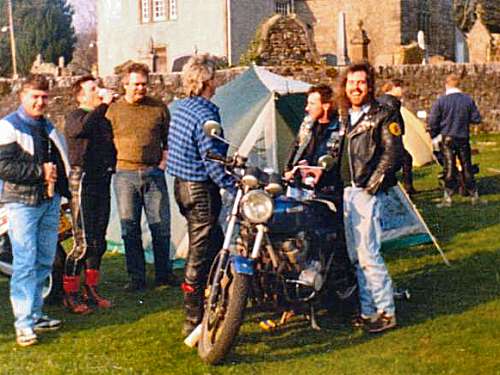 I was in the Balloch Bears. I rode a variety of East European two strokes and a 650 Katana.

Now running a GT Kawasaki and a GSF 1250 Bandit.

I used to be a member of the Bears too! Nice pics Haggis! Brings back some hazy memories.

If Carlsberg did bike clubs ...

Just looking at some of the pics - my god, everyone was as ugly as I remember them.

I was in the club for a while and enjoyed many drunken rallies - still do.

I even bought Chas' V6 trike, what a beast. Still riding a trike now but not as big.

Got some good memories and embarrassing photos too.

- Daz Carroll
Living in the Highlands still
Now working on the railway.

Did all three of the Flying Haggis rallies, had a brilliant time at all of them, well worth the ride up from north wales.

Is Andy McNichol still about? He gave me his number on the last one but I was that pissed I couldnt read my own writing the next day!