Now there's a blast from the past! Please excuse me as my memory is not as good as it could be.

My name is Dave Wood from Manchester and I started rallying at the 1967 Dragon on a 1952 AJS 500. After a few years a number of non-club riders started to sign in rallies as The Gonads and we started to win club awards - funny as there was no club! 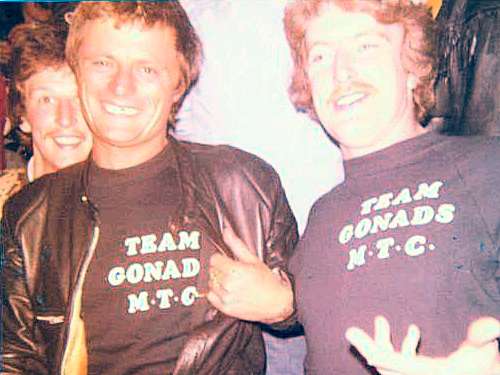 A number of us including Alan Giddens, Steve Giddens, Ronnie Burgess, Phil Youlton, etc, thought we could run a rally so we did. Well two rallies actually.

Held on a 20 degree slope high above Oldham in 1972 & 3 or thereabouts with no facilities at all but a toilet tent and a small frame tent with free tea etc. We hired a transit van to take folk down to the White Swan pub in Oldham (made famous by Coronation Street - "The Flying Horse") which was our local bikers' pub and where Lois Slicker, the landlord served "afters".

It rained of course.

The second rally was much the same - little facilities, rain, van down the hill to the pub, afters. Then we cooked everyone burgers etc. for about two hours in a leaky frame tent with a hired Honda generater banging away.

Great fun - everyone should run a rally miles away from anywhere! 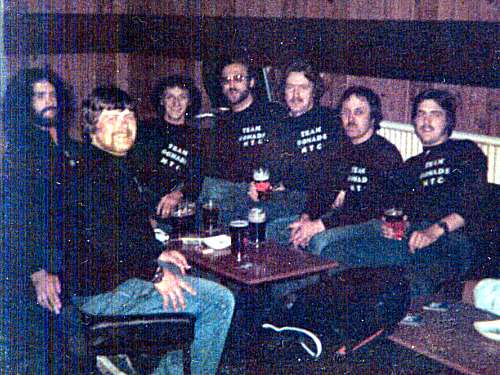 Photo from Neil Disley of the Gonads at the TT in 1978.
Information from Les Hobbs

Daves memory is definitely not what it was as the two Gonads Rallies were held in 1977 and 1978.

I remember Steve Giddens 1977ish had a Goldwing if I recall. Paid me subs and received sheet of Gonad stickers.

Recall going over to Ostend in December 1977 St Nicholas rally. Ended up with a group of Gonads entertaining the locals in a supermarket handing out club stickers.

Never did win a trophy at a rally.

Memories are made of this.