The Clifton and District Motorcycle Club used to meet upstairs at the Railway Club. Clifton and was close enough for Terry Riddle and me to visit regularly. We believed that our support helped as they rarely had more than half a dozen members there. Yet each year they put on the Goose Fair Rally. 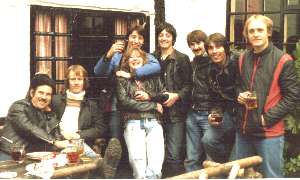 A few years we helped run the rally. I particularly recall helping set up the beer tent and sampling the quality of the Trophy Bitter. Oh yes, it was good. I can also recall being totally unable to walk forward unless someone pushed me from behind. This was a rally with a good sing-song. Well remembered for Ive of the Nottingham 41 club who always supported the rally with his voice.

Will from Tennessee tells an hilarious episode at the 1972 Rally.

About a dozen German Motorcyclist came over to the Rally from the German 41 Club that year. We all know how serious Germans take everything, even at a good booze up on a Rally. The beer tent was packed that night and do them Jerrys pour it down. A big guy from Rheydt in Germany,who was there on an R50 BMW downed 14 pints. Anyway, the thing was, Ive was leading the sing song, the dirty ones of course, but hell, the Germans didn't understand a word of it so they started their own song. But alas, the Germans have no dirty songs so they sang their National Anthem and stood to attention. Ive knew the the English version of the Deutschland Uber Alles and he joined in. The Germans did not understand Ive's words but recognised the tune of their National Anthem.

What a sight it was to see twelve Germans, full beer mugs in their hands, standing rigid to attention to the tune. The words Ive sang went like this and forgive me if you think they not appropiate here on this website.

Joe the postman called this morning
Stuck his p.... through the door,
We could not, despite a crowbar,
Get it out till half past four.
Even now the baby's started
Having epileptic fits;
Every time it coughs it spews,
Everytime it farts it sh.....


Amen to that and we all clapped hands and the Germans where as proud as a dog with two tails. 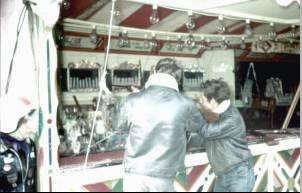 One year the camp was held in the grounds of Wollaton Hall. In the early hours of the morning a policeman shone a torch on the tents and said "We're looking for a 16 year old girl." Our reply was "Aren't we all!"

I have good memories of the Goose Fair Rally and Ivor from the Nottingham 41 Club. He was one of the rally scene stalwarts in the early '70s. I don't remember seeing him after about 1975/6. He used to get hold of a lot of ex-army gear for us. He is the man resposible, if my memory is correct, for getting Dave Honneyman his trade mark Frankenstien suit and he hasn't taken it off since.

I'm surprised Les remembers me and my treasured "Frankie suit".

It was great, it cost me 2 quid and I loved it... warm, waterproof and cheap. The downside was that it took up huge amounts of space especially when wet... which was very often.

Its sad demise was when our lass decided that there was a small rip in the rubber neck that needed attention. She tried to "adjust it" while I went to the bar at the Sidecar Safari Rally. I came back to find that it now had a plunging neckline with the rubber neck ripped right off!

It was a very cold ride home.

I did buy another at the Goose Fair Rally, and this time it cost 4 quid... Still great value for money!

Does anyone out there still have one? 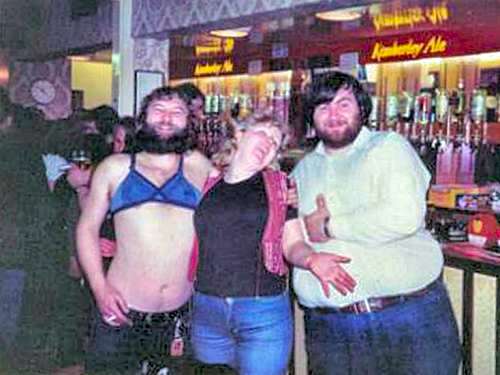 If the people who live in the houses built on the old rally site only knew what went on there in years gone by!

Always a brilliant do, helped by the knowledge that beer would be available well after normal last orders time, in the marquee, and that there was guaranteed to be some late night Rally songs from Ivor. Although the trophy bitter was good, at the time I was a Newcastle Brown drinker. The lack of closing times (and my thirst!) caught me out one year when we had settled in for a late session and I tried to get up for another pint. The floor came up and hit me! It was no great problem because it was only a short crawl to where I had pitched my tent! I couldn't understand why I was so cold that night, but I finally realized I only had my head in the tent, and the rest of me was still outside!! 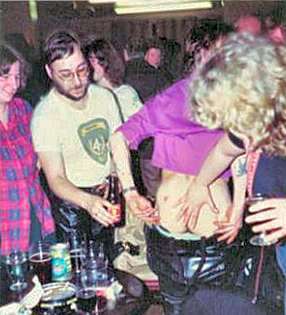 The nearest pub was "The Man of Trent" which served Shipstones Ale, but a bit further out was the Peacock which was a Hardy Hanson pub (which was cheaper!). We used to walk back through the estate and call in to the fish and chip shop on the way back to the site. We were asked to leave the Peacock one time, because Brighton Bob decided to drop his trousers in the middle of the lounge! I can only find one picture of Bob and I suppose we shall have to remember his face because the picture doesn't show it!!

As a member of Clifton MC Club, we always did the Goose Fair rally. Hazy times, but a couple of things stick in the memory.....

A Reliant Robin on the bonfire. Someone should have known better than coming in one of those.

Also someone pilfering bottles of Newcastle Brown from the crates on the ground by pushing their arm under the beer tent canvas. The barman spotted it and smashed a full bottle over their hand as it appeared for a new bottle. Gotta have broke his hand.

Hi Steve. See if you can put names to any of the Clifton & District guys on our skittles photographs.