Held in 1981 at the Fruiterers Arms site, not far from Worcester, by the usual Shakespeare MCC crew, Paul Mullis, Heather MacGregor. It was a good site with a very large camping field next to the pub.

I went to this rally on Barry Clark's Suzuki GS1000/Watsonian Palma outfit with him as passenger. Barry had a broken finger and could not ride, so I jumped at the chance of a long run on his new toy. 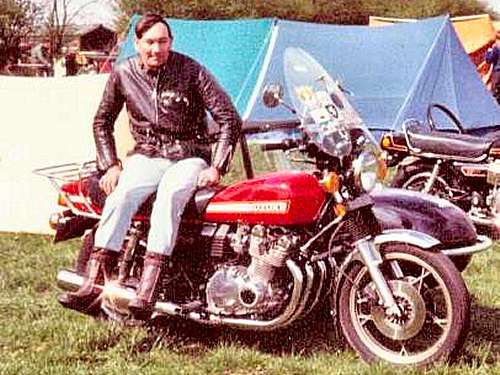 I was under strict orders to take things steady, but he had seen how I rode my GS850/Squire, so he should have known better...

Things started sensibly with a steady run across and down the motorway (well I had to get used it) and I had to slow down a bit due to rain as we got near the rally. We put the tent up and the camp bed I used at that time, but left the rest of the gear in the sidecar due to the, by now, torrential rain and made a dash for the pub.

When we returned at closing time we threw the sleeping bags into the tent and I discovered that Barry owned a unique Force Ten tent; it had leaked! Lucky for me the splashing sound came from his bag landing in the built-in swimming pool, while mine had landed above water level on my camp bed!

The weather was no better on Saturday, but we had a bit of a ride round the country roads and I believe we had a look around Worcester. Len and Marita Tempest were there on their Gold Wing/Wessex outfit and we planned to ride home together. 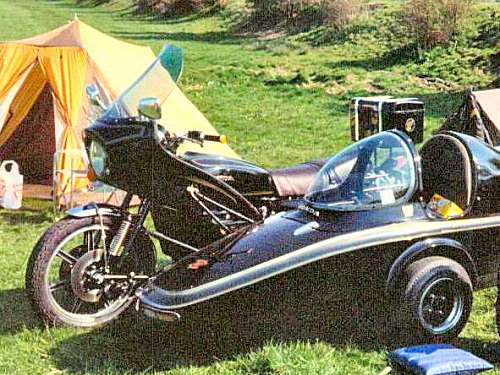 The weather was bad all weekend and would have suited the next years rally name "The Tempest". As you would expect the weather was fine for that one!

The ride home was where the fun started. I had no intention of abusing my friend's bike, but I thought of how embarrassed he would be if a mere Gold Wing left us behind on the motorway. And I don't see why riding a foot away from Len's rear wheel seemed to make him speed up! Several times on the M62 I had to try to try to cover up the speedo and rev counter so that Barry couldn't see it. It went faster if you didn't bother with top gear under 110! We did manage top gear for the downhill bit past the little house on the prairie. Then for some reason it went onto reserve about 40 miles before it should have done ... strange I never noticed any head wind!

I don't know why but that was my last ride on the GS outfit!