David Miller went to the Hibernation between 1988 and 1991. It was held at Bolton Abbey in a field near the abbey car park. Usually a marquee on site to provide food and shelter. The Devonshire Arms Hotel was about half a mile down the road (now a very upmarket hotel).

The organising club, Hedgehog MCC, were - or still are - based in Otley. They also organised the Prickly Pair rally which, after the initial rally on Ilkley Moor, was thereafter held at a caravan and campsite just outside Otley.

As Dave has reported the Hibernation was based in the overflow car park for Bolton Abbey. The bays were marked out by old telegraph poles so you had to be careful crossing the field when it was dark.

As this was only about twenty miles from home for me, to make the journey more interesting I used to go to the Rally on an old Honda ST70 monkey bike I had then. I kitted it out with a tri point screen and soft panniers and it looked quite a touring bike. Actually as it snowed quite heavily at a couple of the Hibernations I was glad I was not on anything bigger. 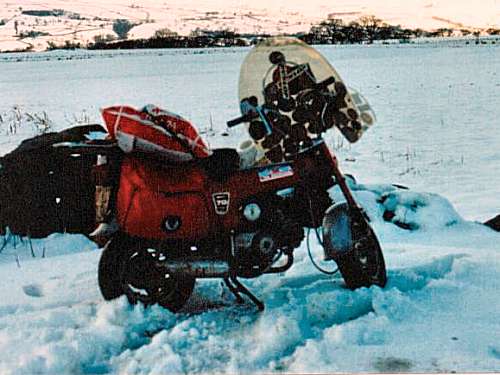 One year I decided to put a sidecar on it. It was OK but with a maximum speed of about 25 mph you got in the way a bit! 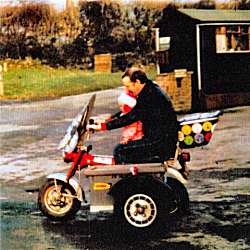 Young Laura Tempest seemed to enjoy her test ride round the car park with me though!

The last couple of years were at The Sportsman at the top of Otley Chevin, a fine place with good beer and food. However the sounds of the aircraft from the nearby Leeds / Bradford airport were nothing compared to the clay pigeon shooting in the next field on Sunday mornings!