Did you go on any of these rallies?

Send in your rally photos, pictures of badges and drinking stories .....

Random photographs from Rallies. Click one to see the report.

Some of the badges I've lost. Many of the places I've forgotten. I hope you can jog my memory with pictures and anecdotes. Those of us who were there enjoyed every minute we've forgotten.

It's strange how people can go to the same places weekend after weekend, the same rallies, the same pubs, and do it for years and not really meet up unless you're introduced by a friend, which is how I know Nigel, through a mutual friend, Rodney Taylor to whom I was introduced by another mutual friend, Steve Cawthorne, who was a hell of a nice chap who I first met at the 1970 Heart of England Rally around the camp fire, sing song and tall tale telling.

I think the problem, if you could call it that was, you had your own little cliques and enjoyed the company so you pitched tents in a controlled area, all sat together, and tended to talk and react or relate to each other and ignore (no you can't use that word) you would nod and say "all right mate" but would not really get to know others around you. There was too much going on you all tended to know the real extroverts or characters. A couple that spring to mind are Johnny Croxson (The Vicar), who used to do a fire breathing stunt, and Brighton Bob who sometimes removed his clothes to be in knickers, stockings and suspenders.

No diaries, with the amount of alcohol I got through I couldn't hold a pen. Just slow recollection ..... I've forgotten most of what happened and doing this also gives me something. Once you get to thinking it's staggering just what comes back, with the input from others - Dave Honneyman mentioned the bike accident at the Aegir Rally, I had completely forgotten about that. Once prompted by a third party, click, back it comes. I hope that my ramblings will jog a few other people's memories and may result in others giving a few lines of input to complete the bigger picture. We couldn't have been having all the fun, others must have had some too. Let's hear about it. It seems to stimulate the memory.

Hi Les, I remember them all. We had some good times

Terry Plant was a member of the Potteries Phoenix MCC and a keen rallyist in the 70s. Sadly Terry died as a result of injuries received in a motorcycle accident . His son Chris hopes to learn a bit more about that side of his father's earlier motorcycle activities. When Terry attended the rallies below he would have been about 19 years old. 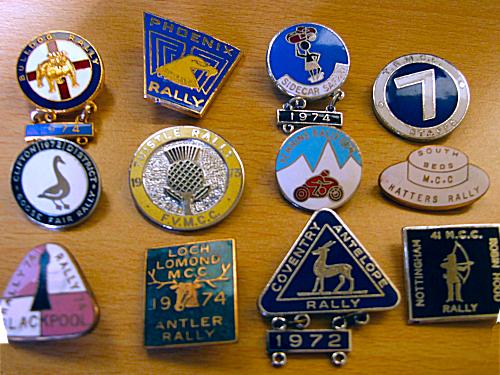 If you rallied in the 70s and recall Terry who came from Stoke on Trent, please send a message to Chris via LPMCC.net.

What an amazing discovery. Finding such a website to something I vigorously participated in the 70's and 80's and still got most of the badges on a musty moth-eaten denim cutoff that will never fit me again.

And some of my long distance awards are still on display in the cabinet.

The body can really feel the changes in the weather nowadays.

I've just been reading about a gathering of 150 clubmen in Richmond, Yorks, in March 1907. The Newcastle, Sunderland, Hartlepool, Middlesborough, Leeds and Bradford MCCs sent contingents; in 1908 there were more clubs and 200 riders and they made it an annual event.

Clubs in the Midlands and South began planning their own regional gatherings. So you could say the first rally was held the same year as the first TT and the opening of Brooklands.

Firstly, and most important, is the topic
(fellow biker with the same memory span)
then the badges and the stories they tell.