In The Basket Rally

The Twits annual rally held during the first half October.

I am told that Friday morning dawned bright & clear. Can't vouch for that myself because for some reason I didn't wake until gone 10am.

We usually pack the bike on Thursday but because the rally is only about 70 miles from home we did not pack until Friday lunchtime. With Maggie on the back we finally left home about 2.30pm. Living where we do it was just ten minutes before we hit the M40 south.

This rally is held in October by the Twits MCC at the Black Horse pub in Great Missenden in Buckinghamshire.
Dave Ranger

I know the way to the rally so I had not looked at a map before we left home. This could help explain why I missed the intended M40 exit. I took the next exit & we made it to the rally via the pretty route.

I can remember paying 1/3d a pint back in the olden days.

By the time we had arrived on site the Twits had erected the booking-in & tea tents. We booked in & received the badges, which were as usual presented in small wicker baskets.

Why the basket theme at this rally? The camping field is used for hot air balloon ascents. Plus I have been told that in a Roald Dahl's story The Twits fly away in a basket.

On Saturday afternoon a large van pulled into the field and the people in it inflated a hot air balloon and took off.
Dave Ranger

The field filled up well for a Friday but the weather being so good we did not make it into the pub until quite late. You could tell that we were near to London because London Pride or Black Sheep were both £2-95 a pint & Smirnoff Ice cost £3-00 a bottle. 35pence & 40pence respectively more than we are used to paying in Stratford upon Avon.

Beer has gone up a bit over the years. I can remember paying 1/3d (one shilling & three pence) a pint back in the olden days. (Just over 6 new pence)

Maggie & I ate in the pub even splashing out on a sweet. We left the pub about 11.15pm & retired for the night.

I had not taken drink for the last hour before going to the tent so I did not need to get up before 9am on Saturday morning. By this time the sun had burnt through the mist & it had started to warm up quite nicely.

Maggie & I went to the pub for a bacon roll before walking round the field for a chat. We discovered that quite a few people had been into Aylesbury on previous years & had decided to go to Amersham for a change. From what was said Maggie & I gathered that all Amersham had to offer was pubs. We opted to hop on the bus, use our passes & go to Aylesbury & it's large shopping area.

Now I just love shopping. We spent about four hours trolling around before returning by bus to the site. 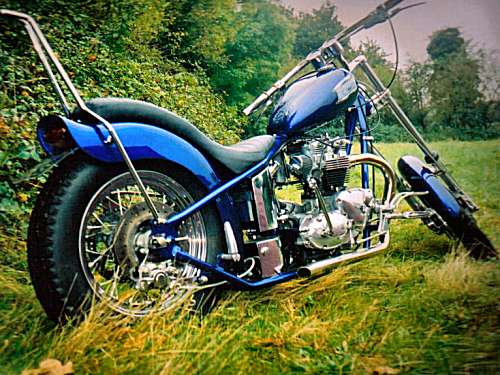 More people had arrived while we had been away so we spent catch up time in the field before returning to the pub.

We had eaten at the BHS restaurant in Aylesbury so we did not need a pub meal. Just as well because the chef had walked out that afternoon.

It is a trad rally so the pub is the focal point with two more pubs in the village within walking distance.
Dave Ranger

Part way through the evening the landlord put on a couple of polypins of IPA at £2-50 a pint. It wasn't to many people's taste, nothing actually wrong with it but a pint lasted me about three hours. I suppose that saved me at least £4-00.

We went to the tent for a good nights sleep before waking at 9am to be greeted by thick mist.

We took advantage of the Twits' tea & toast tent that gave time for the mist to give way to warm sunshine. This dried out our tent quite nicely.

Only 70 miles to get home so we spent time talking & watching a hot air balloon launch before finally departing, just as the Twits were packing up to leave.

We did not need to rush so I took a roundabout route back to the M40.

Overall it had been another good Twits rally & we look forward to next year.