Although originally run by KKS (Karuby Klub Scunthorpe?) most were run by Grange Farm MCC on the fields near their clubhouse at the Grange Farm Hobbies Centre, Scunthorpe.

I have to say I have been to more scenic campsites! But on the other hand the view of the steelworks was stunning, especially at night when the flames from the blast furnaces lit the skies and the sounds of steelmaking lulled you to sleep! You could always count on having a good coating of metallic dust on your bike as a reminder of your visit. 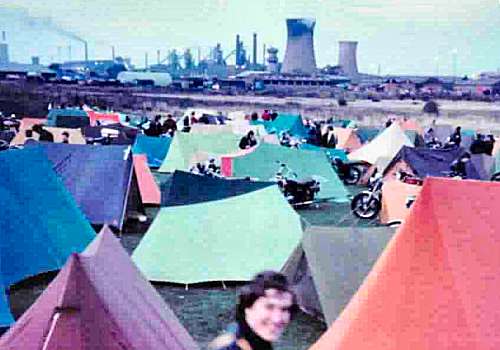 The bar and the hall in the Hobbies Centre were open to the rallyists and food was available from the clubhouse. A bit overdone one year when the building caught fire and burnt down! The bar was normally a private club and had gaming machines. Ian Waugh from the Tees Tornadoes always seemed to have the knack of dropping the jackpot most years we visited; the locals were not happy! There was also a selection of other pubs within walking distance, or you could go into Scunthorpe town centre... 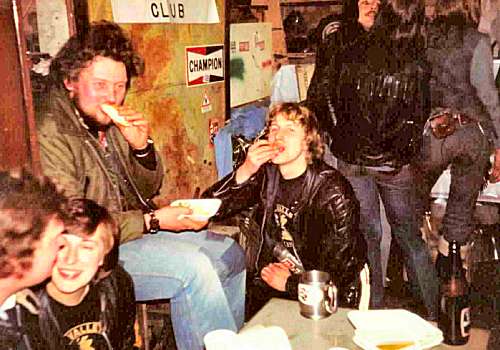 It was just a short hop over to this Rally from Bradford, so Dean Valley MCC always had a good turn out of club members. Some trips were better than others. I ran over a set of baffles which came out of Richard Hirst's Bonneville on the M62 "OH how we Laughed!!!!" It's a good job I had three lanes to control the tank slapper it caused!

One year I rode over with Tees Tornadoes. Ian and Jim Waugh, Preston and Julie King and baby Andrew in the sidecar. I think we had been at Barry Bantam's wedding. 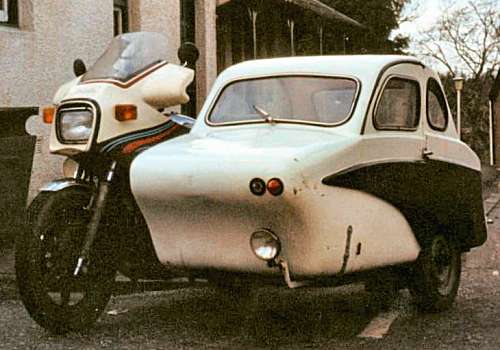 Just before Scunthorpe on the motorway is a long right hand curve, I was on my Goldwing EML sidecar outfit and had been 'pushing' Preston on his XS1100 Martini Yamaha / Hawkon 4 outfit. As I accelerated past him I saw that he had his foot up on the handlebars to force it round; I must have a look in 'Roadcraft' to see if they describe that technique! To be fair sidecars don't come much bigger than the Hawkon!

On a Sunday morning another year, I got up before Barry Clark who was in the next tent to me. He thought he heard me trying to start my Honda 500/4 without much success, gradually flattening the battery and then trying the kick start, also unsuccessfully. The thing was it wasn't my bike and the really big chap who couldn't start his bike was not appreciating the barrage of abuse and suggestions coming from Barry's tent. It was hard work keeping quiet, and when Barry finally stuck his head out and saw his mistake I nearly wet myself!

My name is Stefan Gats and I was one of the two founder members of the KKSMCC (Karoubie Klub of Scunthorpe). I ran the 1972/73 Iron and Steel rallies. In 1974, with no old members left they wanted to change the name so I left with the name and everything!

My first rallies were in 1968 and I still go to them now!

The club still exists now as KKS 69 MCC. My rally now is the Black Pig there are four in 2009 Feb/May/July/Oct - check website.

As already mentioned, strange place for a campsite, but spectacular on a night

Went to this rally 10 years in a row, won best bike 3 times. But the best memory was the two Honda 50s the club welded together to form a three wheeler - no handle bars, just steer it by a mixture of throttle control and back brake. What a mixture, take two drunk rallyists add one home made bike stand back. Just so funny.

The Iron and Steel. Nothing quite compared with that gathering. Attended a couple along with the odd Yard of Ale with mates Ron Wilson and Brian Wills from the North Midlands MC in the late '70s.

I remember well the trudge up from Nuneaton with the mandatory stop at the Grey Horse in Collingham for liquid refreshment before getting into full stride at the Hobbies centre.

Will never forget the steelworks down the road. Looked like something from a bad nightmare after dark, with smoke, flames and glowing trucks of hot slag being shunted about 24-7. But there were real skills being put to use and developed there, and people gainfully employed.

Always had a soft spot for Scunthorpe after that.

I didn't ride, I was way too young, but my mum was stewardess (and dad helped some nights) of the Grange Farm hobbies centre in or around 1974/5. I remember all the bikers that used to go in at weekends. Just wondered if anyone remembers Margaret and Roy Willison?

One particular denim and leather clad fella I only remember as Steve stood me on a beer barrel and pulled out my wobbly tooth! I was only 5 or 6 at the time and the 50p he gave me went straight to the tuck shop window.