My first Partitour with the International Motorcycle Tour Club soon after listening to the Deans at the Elephant Rally.

I was working for Dunlop at that time and they were promising to send me to their Canadian office in London Ontario run by Mike Podborski (father of Steve Podborski, first North American to win the Alpine skiing World Cup in 1981/2). There was a great deal of delay. 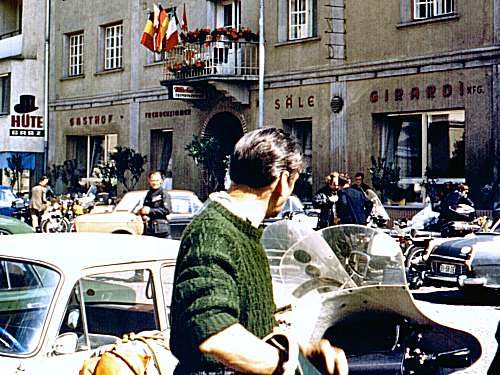 The target moved to Washington DC office in the USA. I was unable to plan any motorcycle trips because of the uncertainty and complained to my manager. He responded by saying if the company expected me to cancel a holiday they would have to compensate. Having my bluff called prompted me to join the IMTC and book for the 1972 FIM rally at Lake Ochrid. It also stirred me to prepare a 1959 350 Matchless single for the trip - or to be sold with my chattels if I emigrated! I did eventually work abroad but it was in Brazil and a year later. Funny how unrelated events direct life.

So it was that I found myself and my 350 Matchless on the 1972 FIM Partitour. The first day's ride was 350 miles and took 12 hours. The second day was 400 miles through the Alps in the rain and took fourteen hours. The Matchless 6v electrics had already fallen to the Curse of the House Wipac and I was reduced to following other riders for the last fifty miles in the dark over wet mountain roads. I thought I wasn't going to last the course.

We weren't the last to arrive at the hotel and although we missed our meal we did get rooms. A later arrival had to wake the night porter and, as all the rooms were allocated, he was given the porters 'day bed' to sleep on. In the early hours of the morning he was woken by a bell clanging away. It was our last arrival who had made a detour to the BMW factory to have his bike sorted out. When we crawled down stairs for breakfast we found a fully dressed rider laying on the stair landing. "Ready to start already?" we asked. "No, I've only just got here, and I'm trying to sleep!"

The next day we rode down out of the Alps into sunny Yugoslavia and 250 mile flew past. The rally suddenly became a holiday as each day we travelled further south on the autoput. Each night the twenty motorcycles drew a crowd of admiring onlookers and at some places we parked the bikes inside the hotels on their marble floors! 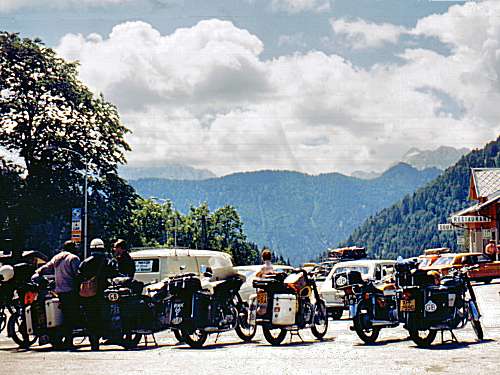 There were other problems with the bikes. A BMW had the gear box lock solid and it could only be repaired by removing the rear swinging arm. Another BMW suffered a bump that bent the Earles forks. They were repaired by flame cutting them in half, straightening them one at a time and then welding them back together. I made a mental note never to get a BMW!

Our route through Jugoslavia took us from Villach to Slavonski Brod and Kragujevac, mostly on the horrendous Autoput - a single carriageway 'motorway' linking Western Europe to the Middle East with appropriate traffic. 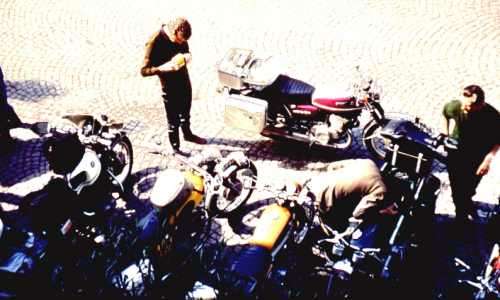 The rally was at Lake Ochrid, inland from Albania. The Rally provided various meals but there was not the intrusive compulsory activities of later rallies. The weather was great and we even took a day trip into Greece. 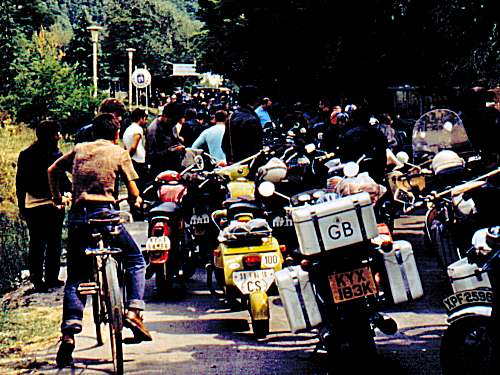 The Russian 'team' had all arrived on identical new Urals and Cossack motorcycles. Unlike our group, who ranged from teenagers to pensioners, they were all mid twenties and with a .. er .. military hairstyle. They would not let anyone near their bikes and locked them away in their own hotel with guards to prevent access. 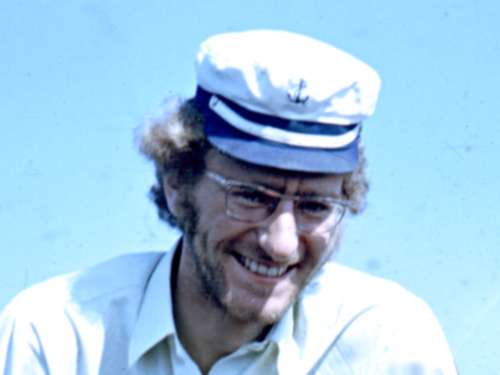 One day some of the rally participants took a trip on the lake to see what the area looked like from that perspective. When the boat returned to shore they asked to be landed on the quay of the Russian hotel. Having outflanked their guards they checked the bikes' milometers. It is alleged that they were all identical and far too low to have covered the distance from Mother Russia. A subsequent inquiry by the International Jury resulted in the Russians being barred from the FIM Rally for several years.

The route back took us along the Adriatic coast. On one dusty track near Pec I had to put the bike into a ditch to avoid a maniac in a lorry. Because I was riding alone I had to take off all the luggage so I could pull the Matchless back out. 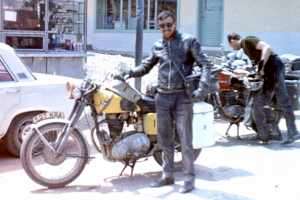 On the mountain road from Pec to the Adriatic the roads were like wet glass and after seeing two or three accidents I realised why when I braked and ended up sliding down the road towards a river gorge. By this time we were losing riders every day, mostly through damage to the motorcycles. The Matchless 350 was rugged enough to take it.

So was a Norton Commando. On the route from Ochrid to the Adriatic the rider kept 'dropping' it and every time he bruised his legs more. Eventually he could not stay upright. He shipped the bike to Belgrade with the intention of taking the train home. There he met up with one of the rally organisers who insisted that he should fly home, organised the plane, saw him aboard ... and gave him the bill!

Another casualty was a 250 Honda. The rider was tired of resetting the cam chain tensioner that should be just off the chain. He allowed the tensioner to run on the chain under spring pressure. The cam chain broke.

Our route back took us at a more leisurely pace through Split, Trieste and across Northern Italy. The scenery through the Dolomites and the Lakes was fantastic. After staying in Como for a night we crossed into Switzerland by ferry.

That evening at the hotel the party sat at one large table. I ordered aqua con gas and it was a long time coming. I needed a drink after the long day and called for them to hurry up. The waiter gave me a dirty look and banged the bottle on the table in front of me. It was one of the old corona type bottles with a pot and rubber stopper wired on. I didn't move the bottle, I just cupped the neck in the heels of my hands and carefully toggled the wire off. I watched in horror as the gas at the bottom of the bottle exploded. To prevent a fountain I stuck my thumb over the top. Big mistake. The water squirted out in all directions and everyone and everything at the table were soaked. "What trick are you going to play tomorrow?" I was asked with more than a hint of sarcasm. "Oh, it will be something special!" I boasted prophetically.

The following day I nursed the Matchless through France alone, keeping the speed to about 50mph. As I was entering Vitry le Francois I slowed down for traffic signals. As they changed to green on my approach I resisted the temptation to accellerate across the junction and kept the speed low as I looked out for cars jumping the lights. Not so the bus that was following me. The driver immediately accellerated, possibly thinking I was making a right turn. As a result I became trapped between the kerb and the bus. As the bike toppled I had visions of going under the back wheels of the bus. I was lucky to get away with just a large piece of missing foot. That was my third trick.

I spent a few days in the local hospital until I could hobble. My bike was still OK but I decided that a foot in plaster demanded a train ride the rest of the way home. In Paris the bike needed to be transported from one side of the city to the other so I went on ahead and returned home via Le Touquet/Newhaven and British Rail.

Many of our party ended up returning by train as the Russians had been accused of!

My faithful Matchless arrived at Leicester Station about a week later and by then I was OK to ride it home. The story of the Commando was less fortunate. It took six months for it to arrive in Blighty. Although it was hardly damaged when it was shipped, by the time it arrived the rider said "It looked as if it had been lifted by crane and dropped on every possible side."

This was really interesting reading. I'm going to FIM Rally in a few days in Herentals, Belgium.

It was pretty good writing.