As the name says kaas stad - "cheese town". It's one of the things the Dutch are famous for. Cheese auctions are held in Alkmar every week but the rally was just once a year held at a campsite just to the west of the town near the bypass; walking distance to the town if you wanted to have a look around.

Being held in August nearly always ensured a good turn out. Most of the regular rally goers turned up either on the way back from somewhere else or at the start of their hoildays. The rally site was a proper campsite for caravans, but we were kept apart having our own beer tent, disco and a wooden dance floor. 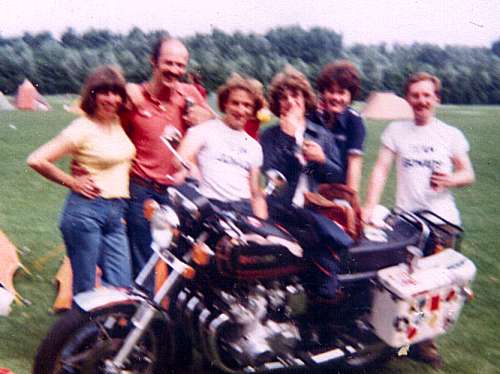 The Gonads at the 1979 Kaasstad. Read comment from David Smith.

One year, I think it was 1978 or 1979, a couple of the lads from the Manchester/Oldham area turned up including Neil Disley who won an award for being the lightest person at the rally. We had to fill him with beer to stop him blowing away. Neil attended a fair few rallies in the mid to late 70s and hung around with the Gonads. This particular occasion may well have been the last time that I saw him.

The four years that I went to this event the weather was always fantastic. A well run event, as most Dutch rallies are, with security - you can't get a bike off the field without your signing-in papers.

In the photo, from the left is Les's girlfriend Sonja van Vuurenme, Les, Neil Disley, my brother Joe Smith, Carole Wilson and me (David Smith). It was 1978.

Memories of that rally

Going to the toilets at a Dutch service station and having a chat with a young lady cleaner who was on her knees scrubbing out the urinal next to me while I relieved myself;

Joe going for a walk on what he thought was a grassed close-mown lane but turned out to be a narrow canal covered in green algae;

Joe ordering fish at a Fritterie van and complaining that the rollmop herring they sold him hadn't been wrapped in batter and was raw;

After the rally following Les back to his girlfriends flat in Amsterdam (I think) for more beers, coffee and cuddles from her cats.

Disley falling asleep on the way home (M6) and veering left across three lanes and onto the hard shoulder before waking with a start;

All of us kipping down in sleeping bags for a couple of hours in the foyer of a service station as a result.