Held from 1980 in Glencoe by Jim Twaddle and a variety of other "Mad Scots" on the nearest weekend to midsummer.

Originally we camped just down the road from the Clachaig Inn, and Friday was spent creating bridges over the ditches to allow the bikes access to the field. 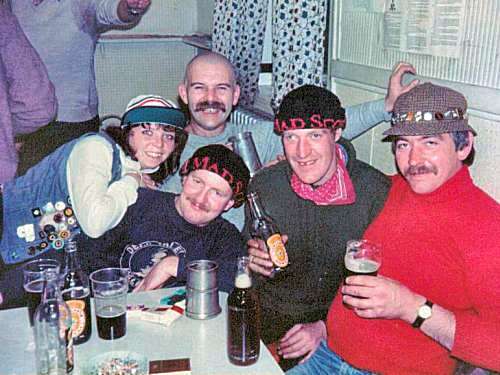 There were NO facilities at this event. Just a convenient wall part way up the mountainside and an ice cold stream. What if it is midsummer? This is Glencoe!

There was always opposition to wild camping in the Glen which was eventually prevented partly by fencing and mainly by creating a wetland area.

The final year we camped in the Glen itself saw most people flooded out! Only Alan Barclay and myself stayed put, but to get back to the road we had to cross a stream! The rest of the rallyists took over the Alpine bunk house down the road. I will never forget the sight of Bill Cormac's tent pitched over a path that had turned into a virtual river!

The weather may be extreme at times (nearly all the time!) but the view up the Glen (when you can see it!) is magnificent.

Did I forget to mention the midgies? Well yes there are one or two about, when the wind drops!

It was on a trip out from this rally in 1991 that my R100 RS tried to incinerate me! I was at the garage just north of the Ballachulish Bridge and had just filled up with petrol. It holds just over five gallons. I noticed that when I pressed the starter button there was a puff of smoke followed by flames from under the tank. The starter main live lead had shorted out onto the fairing bracket. Apparently quite a few RSs did this, but BMW never actually did a recall! Only some quick work with some side cutters and a fire extinguisher saved a major incident.

The garage charged me for using the extinguisher despite the fact that they would have needed new premises if I had let it burn! I had to get recovered home, but I was pleasantly surprised when the recovery vehicle turned out to be a 525i BMW car and trailer. This was a left hand drive car that had been involved in an accident but was never claimed back by the German owners. The recovery people eventually claimed it, repaired it and put it to work.

Sid Beaumont and a few others passed me in the queue for the Erskine Bridge toll and were shocked to see me apparently trailering my own bike home with a flashy car! I had a nice dry ride home for a change.

The rally eventually became too popular and has for many years been scaled down to just a camping weekend.

It's hard to decide which was the worst about Mad Scots' camping weekends, the midges of summer or the cold at the November one?

I can't recall the year but around 1985 or '86 when we wanted to be 'away early' on the Sunday morning as we were living in Surrey, but had to wait until about 10:30 for a snowplough to go up the Glen which we all slowly followed across to Tyndrum in the sunshine. That sun lasted about another 20-30 minutes, after which it pissed down for every bit of the 450 miles.

Always in Glen Coe on the weekend closest to midsummer night ...

We have camped there many times and I have many many memories and several photographs. I think our tent and bike might be in the picture. I seem to remember that these camping weekends were invitation only at the beginning.

Several wonderful memories, like the time we followed Ian Waugh who was on his way to one of the freezing cold water pools for a dip. He was walking along the road in his shreddies and his bike boots.

Or the time that Bob and Lesley and David and I decided to climb up to the waterfall, half way up the glenside. I stopped when I got to the waterfall, but David, Bob and Lesley all decided to climb on and climbed across the peak! They must'a been bliddy mad. Anyway, worse was to come, cos I decided to read me book up by the waterfall and relax up there and take my time to get back down, only to find that Jim Twaddle was all set for sending the Mountain Rescue for me! I got it in the neck ... and I wasn't the one who was daft enough to climb the peek without equipment!

Or the time that Gordon climbed half way up the glen and fell asleep in the blazing sunshine (relaxed as a newt). Oh dear, his face was as red as his hair and beard. Ouch!

Probably my favourite memory of Glencoe is that of the weekend that Jim Twaddle and Liz got married. David's mam had made them a full fruit wedding cake and iced it. We fastened it to the cake board with 3" wooden dowling pegs and packed it into a spare pannier and carried it all the way from West Auckland up to Glencoe and we got it there in one piece, icing intact! Good times..

I've just been reading about the "Mad Scots Rally". I never knew it was a rally, I thought it was just a camping weekend.

I attended a few of those magic camping weekends in Glencoe, absolutely brilliant except for the wee Tartan Kilted, Bovver-Booted Beasties that are quaintly referred to by Ted Trett as "midges". Anyway, the photos are from that time.

As you see in the photos, I'd fitted a Comstar front wheel to my Honda 400 Four 'cos some twit I'd spoken to at a rally said it would fit and be OK. 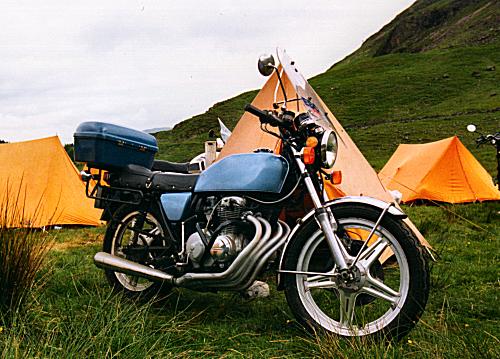 Anyway, on the way back from the Rally coming down the long straight past the Catcleugh Reservoir after dropping down from Carter Bar on the England/Scotland Border, I was motoring along a bit and the bike suddenly started doing the tango and believe me I was a very unwilling partner in that dance. I took up both lanes for about ½mile until I managed to get it back together by braking and accelerating at the same time. Thank God there was very little traffic about. You'll know what I mean, you've probably done that got the T‑shirt etc. The 400 Four had never had a tank-slapper like that before.

When I got back the comstar came out and was chucked out for the Ragman.

PS: I wonder if anyone remembers a guy who used to turn up in a Touring Coach at Glencoe camping weekend. Do you know anything about it?

Just to add to Dave Honneyman's piece on the Glen Coe Mad Scot Camping Weekend ... He asked if anyone could recall the bloke who used to turn up in his camper van.

I think this was Stefan - Polish surname, was it Grabinski? He was originally from Glasgow - a mate of Jim Twaddle. Stef was a sound engineer for the BBC, as I recall, and before the converted camper van he rode, I think, an MZ.

I remember he decided to give up his job and 'tour' the UK and the continent. For some reason the phrase "Continental Tourist" and the names Ian Waugh and Jimmy Waugh come to mind here

Stef converted an older van into his 'camper van'. He built the innards himself then took himself and his dog, Wolf, onto the roads. He used to turn up at the odd rally.

Is this who you were thinking about Dave?

Stef is alive and (reasonably) well. I'm not quite sure about the dates but round about the time he was working for the BBC he went to Canada and toured on a motorcycle for some months.

He lived in a variety of vehicles, including some old coaches, which he converted himself. He still has an alsatian but has finally moved into a house.

I used to go to rallies back then and recognise several names on the site. Is Val Lambton the woman who kept ferrets, or have I misremembered that?

Reminds me of my youth,
"where's it gone?"