Once again it was Alan Barclay (The Banker) that was the inspiration for this Rally.

We travelled together with Al on his 500/4 and myself on my 550/4 F1. We arrived sometime on the Friday and that evening sampled a few local beers with Dave Honneyman Honda 400/4 and Preston King on his Ducati, both from the Tees Tornadoes Club.

This was a rally with a difference as the following morning we were to collect individual directions and instructions enabling us to navigate a route and observe and record landmarks etc en route. There were awards for best performances etc.

The next morning the four of us assembled and once in possession of our instructions we set off out into the countryside. Preston was at the front followed by Al with Dave in front of me. Not far from the start we took a left fork and to be honest I'd not looked at my instructions. In order not to be a mere sheep, I pulled up and had a quick look at the route, that was in the clear window of my tank bag. Satisfied that all was well I set off again with a view to catching the others. About a mile down the road I was going downhill preparing for a right hand bend when I noticed smoke rising over to my right. As I entered the corner I passed Dave Honneyman who had pulled in to the left. I slowed and then noticed Alan Barclay at the side of the road rummaging through a pannier.

My next sight was Preston King's Ducati lying on its right side with flames licking the wiring and in front of that lay his burning petrol tank. To one side was Preston himself doing a superb impression of Basil Fawlty. By now I'd stopped and taken my helmet off when this huge jet of burning petrol burst from the back of the petrol tank. 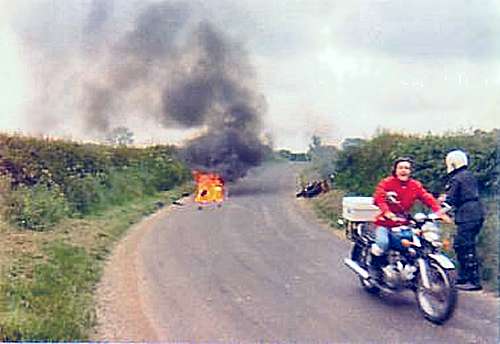 My first reaction was to move my bike as I was far too close for comfort and so without helmet I spun the Honda round and legged it. I now spotted the object of The Bankers thrutchings as he stood there rattling off photographs like David Bailey and I just couldn't stop laughing as I rode by.

Poor Preston. I can't really remember the exact outcome but I'm pretty sure that Al's photos assisted the insurance claim and Preston knows that I wasn't laughing at his misfortune - it was the Banker that cracked me up.

The remaining three of us eventually completed the course but won nothing.

There was no badge for this rally. Instead we got a small wooden plinth as shown at the top of the page.

Don't know if any more Navigation Rallies were run.

Maybe someone else has some memories?