The Oasis was the second rally I attended. It still for me remains the joint best along with the 2006 Wozwolf.

The site was near Corfe Castle and the weather for the August bank holiday weekend was endless sun and into the 80's. 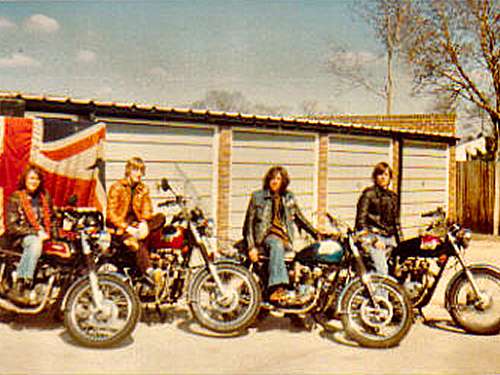 With me were Woodsey, Little Triumph and his brother Jan and some others that I cannot remember.

The bands were very good on both nights with the Tigers of Panyang playing on Saturday night.

Phil the Spill managed to squeeze a few more memories of the 1980 rally by concentrating hard on his photos.

We, (the club and I), were getting used to rallies by now, although I had missed one that some of them had been to since our 'initiation' a year ago. So we decided to go a bit further away than the centre of Surrey. Dorset! (How we laugh nowadays at our daring!) Near Corfe Castle to be more precise. Due to the distance from home, Dave 'Cuppa Tea' had taken time off his work and managed to turn up without suit and tie.

This being held on the weekend before the Bank Holiday, the weather was glorious and we had no trouble at all with setting up our equipment in the firm ground.

Friday night went, as they so often do, in a friendly manner, some of our people knew some people there and we chatted and consumed such food and drink as we had obtained on site, around our, almost compulsory, bonfire. Strangely, I cannot remember spending much time in the marquee. This may be because the music didn't appeal, or perhaps I still wasn't used to standing around an enclosed area with several hundred 'oribble 'airy bikers.

Saturday morning we went off to investigate Lulworth Cove and Durdle Door for a couple of hours.

In the afternoon we headed back to the site for the games. The organisers were a bit unhappy as a scooter they were intending to use in a jumping contest refused to run right. One of our guys was a bit of a mechanic who took pride in his ability to get most things mechanical doing what they were supposed to do. After only about an hour, he had stripped the engine down, rebuilt it and had it purring away possibly better than it was before it arrived. Then quite a few guys jumped the vehicle for various distances until the frame broke, at which point several large sledgehammers were produced and people were invited to cause as much damaged to it as they could. Well, it WAS a scooter, after all!

Various other games happened, mostly pulling and throwing type of activities. Several people started doing wheelies around the field, but I don't think that was part of the arranged games. After these strenuous exertions, most people just relaxed in the warm weather until the evening festivities kicked off.

These again, (for me, anyway), did not seem to include the marquee, centring mostly on our area. The wood for the fires around the site started to run low and there were several obvious tracks across the road outside, where people were going through the hedge to the field opposite and grabbing as much straw as they could, to keep the home fires burning, but not before, annoyingly, my spray-painted spare helmet, deemed damaged by the paint, had been incinerated.

It was at this rally that I first experienced the time-honoured game of revving-the-nuts-off-the-bike-at-2am-until-it-siezes. Very impressively glowing exhaust pipes on an old Triumph. Then someone else though they could do better, until a very large gentleman asked them if they wouldn't mind keeping it down a little as he would like to get some sleep. The request was backed up by threats of violence, so the game swiftly ended.

The weather on the Sunday was still good and I do not recall any incidents on the homeward trip to spoil my memories of a great weekend.