Pissed as a Parrot Rally

the rallying lifestyle must keep you fit; shame its not working on me!

It had been a few years since I managed to get to a Parrot Rally, mostly due to a clash of dates, with the Parrot losing out due to being too near to home (about 50 miles). However this year worked out alright so I decided to go over there for the Saturday night. I arranged to meet up with Roy Watkinson from the Tornadoes. But Roy was unable to go due to being rear ended on the way back from the Toad in the Hole the week before. (He's OK a bit bruised and knocked about but no broken bones!)

I had also talked Steve Billing into going (Leeky Steve) and had offered to take him because his bike is laid up at the moment; however he said that he would be able to get there on his own transport. This turned out to be on his mountain bike with a trailer. He had to do about 18 miles including some very steep hills. Shows how the rallying lifestyle must keep you fit; shame its not working on me! 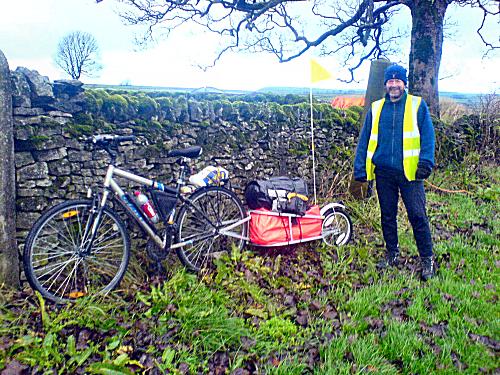 Anyway the weather forecast for the weekend was for 85 mph winds and torrential rain, just as well I have a Force Ten tent then, it shouldn't be a problem. It had been fine all morning at home in Bradford, but it started raining as I was filling up with petrol.

I went down to Huddersfield and it was getting really dark at 1 pm and just to make things better I managed to get stuck in the football traffic again after calling in to see a friend near the stadium. Will I never learn?

The prospect of going over Holme Moss in these conditions was not good, but gradually the sky started to brighten and, believe it or not, I had more or less normal conditions over the Moss, and gradually rode into the light again and even had a flash of sun in Glossop. I had a wet but enjoyable ride down to Buxton. Then the wind and rain made the 50 mph speed limit on the A515 almost sensible so I reached the rally without any problem.

Lots of room for camping, and a lot of people seemed to have opted to shelter behind the pub; some of us had no need to worry about having your tent blown away though.

I am not too sure I could live with a trike, give me a proper outfit any day, but there are ultimates in everything, and I suppose in the world of trikes a Boom and Caravan must be it!

The pub was very welcoming and was providing a bowl of hot pot with a bread roll for a subsidised price of just £1 for the rallyists. The rest of the menu was reasonably priced too, so after a hot meal I felt obliged to see if the Robinson's Bitter was as good as I remembered (it was!) 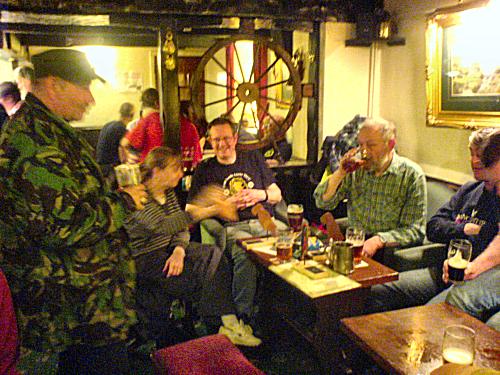 It was nice to meet up with the Parrot Club people again and it is always a bit easier to get round and talk to a few more people at a small Trad rally like this (less than 100 people) without the benefit of a deafening Disco. 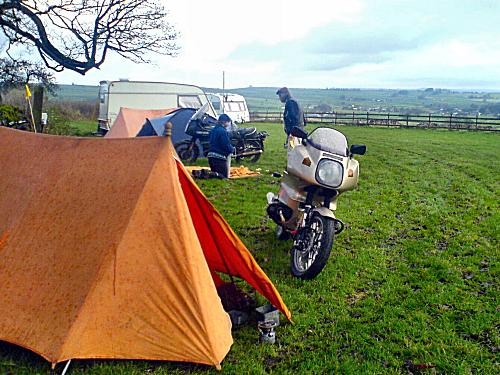 There was a quiz before the raffle and prize giving, but I am not sure everybody took it too seriously; a lot of spurious answers and advice for Sam the Quizmaster seemed to be stage whispered.

As usual I drew a blank in the raffle but the next tickets to me won twice! I didn't come away empty handed though as they picked my BMW to be Best Bike so I got a Parrot trophy to go with my badge! 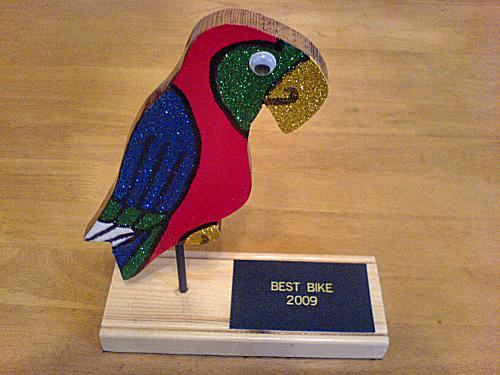 Sunday was a complete change, after one or two showers the morning cleared up and was blue sky and fluffy white clouds. This made me decide on a change of route home, so I turned right in Glossop and went down the Snake Pass, then up over Strines Moor and eventually past Penistone and then home via a lot more back roads, it was about 30 miles extra but well worth it. The Strines road was a bit challenging due to fallen leaves, lots of gravel washouts, and there always seemed to be puddles just where you needed to brake the hardest. It's probably best on a summer's day, but instead you get hordes of Sunday drivers then, and there aren't many safe passing places.

All told another good weekend, not too many miles but no Motorway boredom just proper biking roads!

Moonshiners MCC link - Pissed as a Parrot 1997 Lone Wolf says Wind, rain and more wind. (Must have been that curry)