I liked this one, it wasn't too far to travel and it was pretty central for most of my mates. I'm not sure exactly, perhaps some one might be able to put me right, but I am of the opinion that the Potteries Phoenix MCC was a breakaway group of the Potters Wheels MCC. * 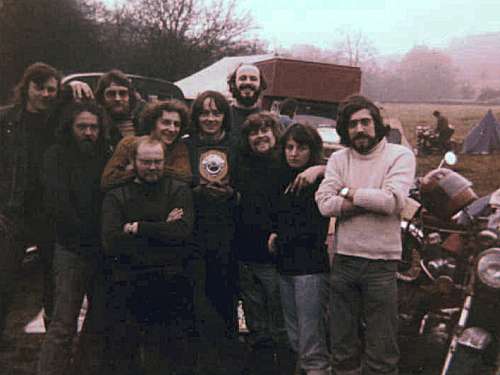 It was alway wise to take your survival blanket along. Several winter time rallies of this era suffered severe night-time frosts. I seem to recall that the rally was held in a small village at a pub called The Light Railway. The rally field was on the right, triangular, hemmed in on two sides by the stream and the road. At the northern end was the bridge over which was the small two roomed pub with some buildings at the back that we used to overflow into. I remember clearly that at this rally came the bad news that Graham Butler had been involved in an accident and had lost his leg. I was talking to Stewart Paice at the time.

It must have been around 1975 I arrived Saturday dinner time, put my bike next to Alan Giddens tent and went to join the lads in the bar to be greeted with the news that the landlord was not allowing us to use the pub on the evening as he had another event booked. A hastily erected bar/shelter was being fitted out on the field, made from scafolding, straw bales and tarpaulings. I had in my panniers a shirt, albeit dirty, I had worn it the day before, tie, trousers, shoes and a smart leather coat. So at about 8.30 I got changed and went into the pub to see this other event. There wasn't one. There was just a handfull of locals. At least nothing had started by 9.00 when I left having warmed myself by the fire. It was mortal on the field, you didn't need a chiller for the beer.

The next venue was a pub by the canal at Cheadleton. Small but we all managed to find a seat of sorts. I remember someone sat on the jukebox and broke the glass top. The landlord threw a wobbley so we had a whip round to get the thing repaired. There was more than enough to fix it. This was the venue as described by Steve Giddens with the fire having to be put out. There was nowhere else to stand and it was burning your legs. It was also the first time that our informal club The Gonads won best club turnout. 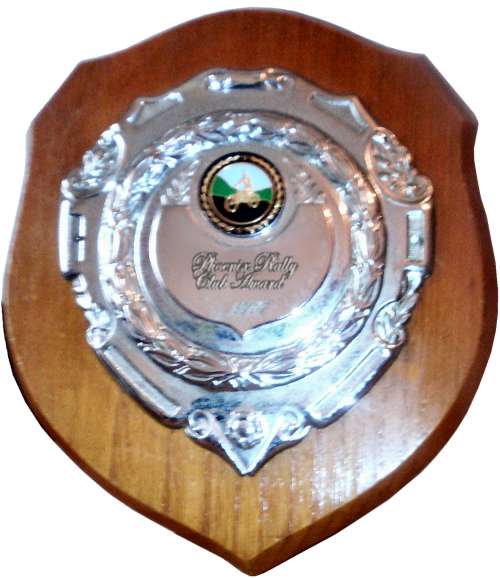 Having said that I would love to hear from anyone in the photograph.

I was member of the Phoenix club for about ten years prior to its slow demise in the mid 1980s.

I actually met Dunk (Potters Wheels chairman) last year(2013) at a bike shop in Stafford. He still rides a bike and has a new Triumph Rocket 3.

Did you read Part 1?