North Staffordshire Motorcycle Club held a few rallies in this location in the Peak District. Monyash rings a bell but so does Quasimodo and they didn't hold it there! The purpose of the rally was self elephant. Practice your drinking skills ready for Germany. 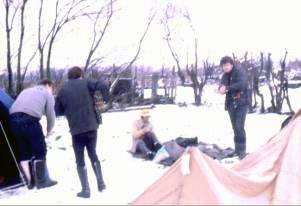 Despite the blurred memories recounted above here are the true facts.

As can be seen from the picture it was snowing and bloody cold. So on the way up we stopped at a cafe for some hot drinks to thaw out a bit. When we arrived at the camp site behind the pub, we went to erect our tents. I then realised I had left my tent pole back at the cafe. There was no way I was going back for them in that weather.

One of the lads, Angus, had ridden up on a Norton ES2 with a box sidecar on it, so the easy option was to sling my tent over the box and sleep in that. You can just make out the cover over the box in the picture. It was absolutely freezing, so a visit to the pub was in order for a little help to sleep.

Mind I suffered for that on the ride home the next day. The road to the camp site was so icy in places we had to get of the bikes and walk at the side of them to keep them upright and to get a bit of traction.

We were not very popular with the other bikers there, as the picture was taken around 6.30am on the Sunday morning and Bernie was playing Reveille on the bugle. We had several rude comments directed at us.

I think you may be incorrect in your assumption that the Pre-Elephant rally was held by the North Staffs Motorcycle Club as I think it was organised by the North Staffs Sidecar Club. I speak with some authority as legend has it that the elephant logo was designed/copied from the cover of one of my colouring books by my dad (Bill Myatt - cream and black Triumph Thunderbird with Busmar sidecar).

I must admit I don't remember the exact location except that it was close to Ilam/Dovedale and was in a field behind a pub called the Dog & Partridge. I know it was held for several years and the coloured band around the edge of the badge denotes the year. Don't ask me which colour is which year though!

I do remember an Ovaltine van (in the shape of an Ovaltine can) which was aways there and dispensed free drinks.

Thanks for the definitive information, Dave. Victor Smith (now in Australia) adds ...

To confirm that Dave Myatt is spot on see the Megaphone Editorial from 1967.