Yorkshire near Hebdon Bridge
January or February 1975 or 1976

We must have been bloody mad. The middle of winter and we're going camping. We arrived mid morning on the Saturday after the farmer had cleared the track from the road to the field with a JCB. Some poor sods had arrived on Friday and already had a night of misery on top of the hill exposed to the full force of the driving wind and snow. Friday night found most of us holed up in Oldham enjoying a pint or two of Robinsons best bitter in the White Swan before crashing out at Alan Giddens flat.

So what to do? Some brave souls were trying to take their bikes up the track to the hill top field. We walked, or rather slithered and shivered, up to sign on and collected our free coffee and made some observations. Some of Fridays survivors had built snow walls three feet high to try and keep the howling wind from ripping their tents from the summit (thank God I had got rid of that Igloo).

After looking around we made a joint decision to leave the bikes on the road, and we were not going to camp in the field that was selected for the rally, (far too exposed) but use the field just off the summit. The farmer is not going to put cows or sheep in it in the snow, and it took the edge off the wind in the lee of the hill. It was also agreed that we would cram rather than put all the tents up to conserve body heat.

I laid a large polythene sheet down on the snow and pitched my force 10 on it and then folded the polythene sheet up over the fly sheet's lower edge and banked it up with snow. In effect it stopped the wind from blowing under the gap between the tent and flysheet (clever b-----d ain't I). A double and a single air bed was inserted into the Vango MK5 which covered all the floor space available. Kit thrown in, it's now pub time.

To give him his due the landlord, who was glad of the trade, rather than throwing us out at 3.00, gave us the use of his one room to keep us out of the cold until he re-opened at 6.00; a real hero.

We all expected more snow to fall, which is why the bikes were left on the road, but it didn't happen. We had a blur of a night in the pub and staggered, slid or were dragged back to the tents.

Now some rallies laid on food, burgers / hot dogs and the like for after the pubs shut. Others didn't, and when they didn't and you had the munchies what did you do? Forget it and go to sleep? NO you fired up the stove and had a bacon or sausage sarnie. We've all done it and then woke up Sunday morning to find some one has entered your tent in the night and stole half of your breakfast and all you have left is a couple of mushrooms, an egg and a tin of beans. It now turns you into a begger. Anybody got any bread to spare? So to counter this we had allowed for it. It was built in to the plan. We all brought something extra with us and had a communial scoff. Nothing to beat it. A large pan and chuck it in, beans, spaghetti, potatoes, hot dog sausages, hamburgers, whatever. You were pissed and you can't throw up on an empty stomach. 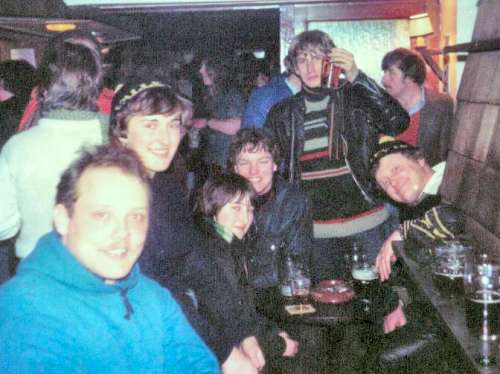 Now it may have been the Rallymans but I think it could have been another rally, but it's worth telling. We were having our "supper" and Sid Beaumont was doing the honours. His stove, his pan, all the grub thrown in. Dave Wood had produced a tin of stewed steak. In it went. Imagine the scene. It's dark, tent illuminated by a single filament bulb, 5 or 6 hungry, pissed rallists all waiting for a share of the stew. bread in hand and as it's ladled out by Sid. He "feels" a large chunk of "stewed steak" on the spoon, which by some strange quirk didn't manage to find it's way onto anyone's plate. Anyway we were all tucked in and Sid removed this chunk of "stewing steak" from his mouth and examined it in the light. It turned out to be a piece of scotch brite that Christine, his wife, had put in the pans so he could clean them! Damn good job it wasn't a brillo pad. We would have all been foaming at the mouth, more than normal.

Jimmy Southward and others
Photos by Dave Honneyman.

We had not really noticed but Sid was holed up in Alan Giddens tent with Alan and Sylvia, and in our oiled state we thought that can't be right. So we unzipped the bottom zip of Alans Force 10, reached in and pulled Sid out intact in sleeping bag, on air bed, and left him in the snow. Within a few moments he joined us in the crammed tent, all jackets were overlapped over the sleeping bags and we were like toast all night. 6 in a 3 man tent.

The next morning was bright and clear cold but the sun was burning like a good'un. Some chap on a Guzzi T3 had packed and was on the point of leaving the hilltop down the track. Now these T3 Guzzi's had this strange braking layout. When you put the rear brake on to steady yourself, it deceided to put the front brake on as well, only more so. Front wheel lock up on an icy covered downhill track. You know where your going. In less than a split second it was all over. We all came over to help this chap with the Guzzi. Well you'd help the handicapped wouldn't you? And it was noticed that some of his luggage had fallen from his bike and, being wrapped in polly bags, had procceded down the track.

Rallymans 1977: Fun coming down the track on plastic bags but not so hot trying to get an outfit up!
Fred Flitney, Sid Beaumont, Steve Cawthorne, John Flitney, Dave Woods
Photos from Heather MacGregor

From that point on any piece of polythene on the site was fair game. We had our own mini cresta run, 1 - 2 - 3 - 4 man tobogans. It was mayhem for a good hour. Snow ball fights, the lot, just like a load of kids, but that's rallying ho hum. It helps burn the beer and burgers off. And it was noticed that there was no southern jessies there as the temperature had fallen a tad or two below freezing.

Steve Giddens just adding to Les's report from the same rally - no doubt the excrutiating pain has fogged Les's memory!

I'd gone to the Rallymans that year with a "non motorcycling" mate called Paddy on the pillion. If your gonna baptise someone ..........

Paddy and I had done the 2 man bin bag run and had started to climb back up the hill. Les was on his way down solo followed by Sid Beaumont also solo. As Les passed us mid run I kicked him and he spun through 180 degrees. Now coming to a rest at the bottom of our Cresta Run on his back head facing down hill legs akimbo. Sid was unable to stop in any other way than to bury both Derry Boots straight into Les's crown jewels.

Most amusing at the time thought everyone except Les. Having seen Les regain his breath and retrieve his testicles from his throat I decided to stay at a distance that would allow for a head start!!!

Yes, we remember the bin bag bobs particularly well as we had the ideal set up of weight and speed within our team: Steve Brackley (anchorman and 850 Commando owner), Martin Tyson (ES2), Pete Rainer (particularly tatty Bonnie), Pam "Babbling" Brooks and Graham (some sort of middleweight Honda).

I remember Pete on the Sunday was desperate for a brew but had made his tea with the only potable liquid he had. Unfortunately it was the brine from his tin of hot dog sausages!

We all hailed from the Wirral and went under the name of Uranus Motorcycle Club to protect the innocent.

I think I had originally met Heather MacGregor and Marita Tempest through WIMA though.

Great to see the pictures. Thanks.