Idles of the Seven (or Severn) Rally

"It was the best of times - it was the worst of times..." - and so begins a Tale of Two Cities. I think that famous opening line will forever portray the mystique of rallying - the warm friendly pubs, and the cold rain-sodden roads. But instead of Paris and London, let me paint for you an impressionist vista of two other towns that you may have visited in your travels, one close to the Welsh borders, and the other on the edge of the Odenwald in Germany - Bridgnorth and Heidelberg. Now, of course, anyone who knows them well will be wondering what on earth I am going on about - and yet, consider; let your imaginary forces work. Both are old towns, standing at valley crossings of principal rivers, and both are blessed with a wandering of old streets, half-ruined castles, and funicular railways climbing the valley sides.

In the land of Housman's "Blue Remembered Hills".

Bridgnorth is an old market town of the Shropshire Marches, where its old houses and castle stand precariously on a red sandstone bluff above the river Severn. Once a vital waterway, the river Severn used to carry barges upstream, through Bridgnorth to Coalbrookdale, birthplace of the world's industrial revolution and the site of Abraham Darby's first Iron Bridge. We are in the land of Housman's "Blue Remembered Hills".

Similarly sited, Heidelberg was (you will surely remember, if you were there in the 60's) the destination setting for the film "Girl on a Motorcycle", where a rather wistful (empty-headed?) Marianne Faithful portrayed a slender, leather-clad waif who is riding her Electra-Glide to meet her lover. An evocative film, where those of us who hated her on sight for her slim pared-down body enjoyed our revenge by laughing at her silly "away-with-the-fairies" grin as she "rode" her obviously trailer-bound Harley from scene to scene. Oh, and just a quick note for you boys - please let me assure you that such films do tend to exaggerate; no woman in her right mind enjoys being thrown down on her naked back in the freezing snow as a prelude to love-making! In her fantasies maybe - but don't even think about it for real - OK? A hint of alcohol and a romantic serenade are much more likely to work - of which, more, in a moment, after a short history lesson.

Just a little bigger than Bridgnorth, Heidelberg stands on the River Neckar, which to this day still carries barges on their way to towns like Stuttgart and Neckarsulm, home of the N.S.U. motorcycle factory. Let us digress for a moment, and step back into motorcycle history, to the early 1930's, when N.S.U. were growing to become manufacturers of some very fine raceware, and they found themselves in dire need of an international-class designer. At that time, the Norton factory in Birmingham (actually not a million miles from Bridgnorth) was building excellent machines, designed by Walter Moore. With a blindness common to much of Britain's manufacturing base, Norton decided that although Walter had designed the machines in his own time, virtually on his own humble kitchen table in the Black Country, they need not feel obliged to pay him for the service. "Why", they thought, "surely Mr Moore would be deeply humble and grateful to be working at Bracebridge Street and to give up his spare time for free!" N.S.U. of course, had a rather different point of view, and not only offered to multiply Walter's salary, but threw in a mansion in the Black Forest (complete with a private swimming pool) if he would bring his designs with him..... So what did Walter do? Did he have the sense to run for Germany as fast as his legs could carry him? You bet your cute little behind he did, and Norton had to start all over again. And if you don't believe me, compare the early racing Nortons with the N.S.U. models and try to spot the difference.

Gosh - isn't it amazing what diverse rubbish we commit to memory?

Anyway - that's the end of our diversion, and now it's time to return to our romantic comparisons of the two towns. Have you ever walked with someone special along the old Castle Walk, high above the cliffs of Bridgnorth, and looked out across the town to the gentle wooded slopes on the opposite side of the valley? Or maybe turned to see the steam trains easing into the station at the end of the restored Severn Valley Railway?

Or maybe you have wandered lonely and alone along the Philosopher's Walk, leading into the Odenwald, high above Heidelberg, with its views of the be-castled old town, while far below a Ducati rumbles past. Then again, maybe you have spent a pleasant summer evening, being wooed with heady wine by a casually-met stranger on the pavements of the Marktplatz (of the two, the second turned out best...!)

Let me take the romantic comparison a stage further. Heidelberg is, as you will surely know, the setting for the opera "The Student Prince", containing the finest drinking songs of all time. Against this, pull your mind away from the beer-kellars of Heidelberg to the Unicorn Inn at Hampton Lode, on the west bank of the Severn a few miles south of Bridgnorth. In either location, picture a happy band of young men and women, beer-mugs held aloft, as visitors and locals alike join together in light-hearted harmony.

In Heidelberg, the Student Prince is singing - "Drink, drink, drink - to eyes that sparkle like diamonds for me..." And at the Seven Rally they are chanting in romantic elegance: "Round and round went the bloody great wheel - In and out went the p***k of steel....
.... 'Till at last, his wife she cried: "Enough, enough - I'm satisfied!""

Oh - what girl could fail to let her head and heart be turned for ever.....? (If you want the full version of the song, you will have to ply me with tempting beverages... right now a hot cup of Earl Grey sounds good...)

Held in early November each year, the Seven (a.k.a. "Severn") Rally was one of those small but favourite gatherings of the 70's. Run by the Trent River M.C.C., the campsite was in a field just below the Unicorn Pub, and literally right on the banks of the river Severn. (Without difficulty, you could stagger out of your tent and straight into the water...) The combination of valley site, river, and early winter also rendered this one of the coldest rallies of the year, with tents enfolded in freezing mists. The Unicorn pub is one of those lovely old country structures that seems to have evolved out of the hillside, and would visibly vibrate and sway to the tempo of the old rally songs. A few yards to its rear (on the uphill side), the pub had the questionable addition of the privately restored Severn Valley Railway, and slightly addled rallyists would stand in drunken and astonished amazement at the sight of an aged steam express passing by in the middle of nowhere!

The pub was also blessed with a gallant and friendly landlord. He in turn had a mynah bird that could mimic human speech. Apparently this poor bird would have to go into quarantine after each rally until it had forgotten all the new and colourfully "interesting" words that our friends had taught it...

(Minor revisit back to our motorcycle history diversion - apparently, the Unicorn also hosted the Norton Owners' Club rally in '79, when almost 15 riders turned up!)

We went to the Lion Rally in 1971 in Belgium: I was in the Norton Owners Club, Bristol Branch. Somebody said "Why don't you come to our Severn Rally"

Off we went to Hampton Loade but saw a sign for it before we got to Bridgnorth. I thought this was a bit strange. Anyway, we set off down the lane and came to the Lion Inn. Down a bit further and Whoa! We nearly rode into the river.

We saw there was a ferry but nobody about so it was off to Bridgnorth and down the other side. We weaved in and out of a railway but didn't take much notice. Got in the field, put tents up but soon chucked that in, due to the sound of a Midland Hooter and the noisy arrival of a Black Five! 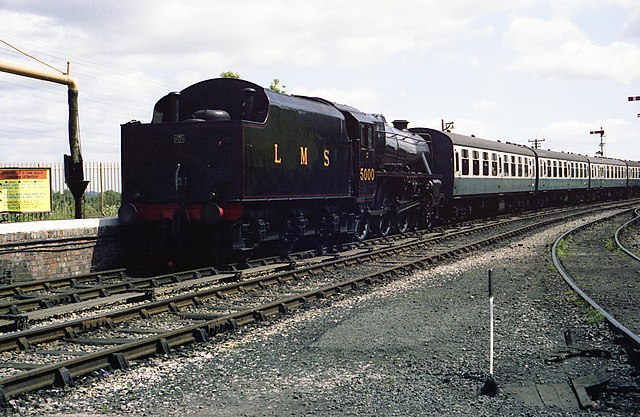 I hadn't seen a steam loco since 1966 when the last one left the Somerset and Dorset railway but here was a real one. It was delivering passengers to Hampton Loade for bonfire night celebrations. Once it left we got back to putting the tents up. On Saturday a visit to Bridgnorth station was called for.

I've only got two Severn Badges, they aren't dated, so I guess we went again in '72.