I believe that the earlier Severn Rallies were run by the W.M.C.& C.C. (Wolverhampton Motor Cycle And Car Club). 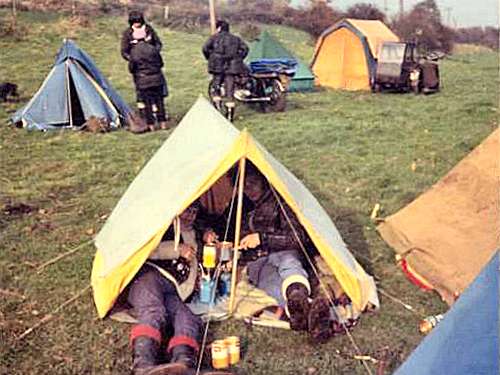 The 1970 onwards events were run by T.R.M.C.C. Tame River Motor Cycle Club (don't know what happened to them) The Tame River is a little brook that flows through the Midlands, highly poisioned by industry, or it used to be when we had some. The Tame River Club was run by a little bubbly woman called Liz who wore glasses and, if my memory serves me well, drove a lorry for a living. She also drove a bike and I think must have piloted an outfit at one time as I bought a Watsonian Monza sidecar from her in 1971 for £27.00 (I still have it) There was one other member of the club that I recall, who I saw at other events; always wore a greasy flat cap. I can see the face but the name escapes me. There must have been more than 2 members but I don't recall seeing any one else helping out,

The site was on the west side of the River Severn and it's amazing how many first timers arrived on the wrong side of the river to be laughed at and then greeted half an hour later after the trip up to Bridgnorth to cross the river. The rally was held the weekend after the Antelope Rally at Coventry. Antelope - the clocks went back and Severn was bonfire night or as near as damn it. And a bonfire there always was thank god. The one thing I remember the most was the cold. It was mortal. We don't seem to get the cold like that now. I used a survival blanket at the Severn the one year and was glad of it.

Getting wise over the years leads to a manipulation of the rules: Small pub, 2 tiny rooms, tiny bar, limit on staff at the back of the tiny bar, slow service, running short of glasses, huge amount of thirsty lads. Solution: lean on the pub door at 5.30, pair up, door opens, scramble, one grabs the seats in the back room, the other gets 2 pints, open the rucksack and get out the Party Seven's. No more waiting or queues.

The other point to bear in mind was the damp patch on the camp site. It was caused by the overflow from the septic tank / soak away from the toilets at the pub. I remember two brave or drunk lads streaking around the bonfire one year and I think one of them ended up in the river after falling in the mud. 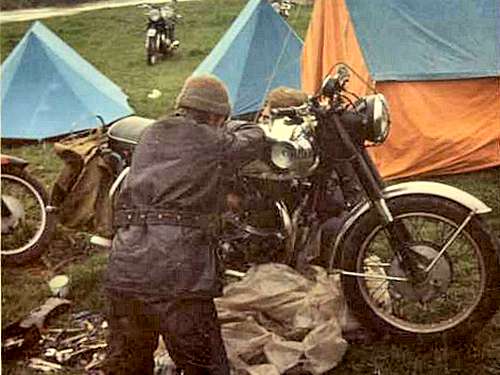 The Severn Rally was always an easy one for me as I only lived 20 miles away. But there were a lot of others travelling a fair distance to get there. Regulars included Roger Halfyard, Kelvin Clouting (who arrived one year on two brand new Suzuki GT 750's, they must have been amongst the first delivered in the U.K.) and John Flitney from London, Dave Wood, Alan Giddens, Mike Shepherd, John Davenport, Tony Cormack, John Jocys, all from the Manchester area and Sid Beaumont from Hull. Another regular rallyist that attended a hell of a lot of rallies was an old (to us then) chap who lived in Wolverhampton. He must have been in his mid 40's. He drove an old BSA M20/M21 sidecar outfit complete with wife and 2 kids. That guy got everywhere. Later as the 2 boys got older the trailer was added to the outfit along with a second tent and a small homemade mini motor cycle based on a Honda 50. It was ridden around the fields by the lads. Whatever happened to this chap? Saw him for years, never spoke to him, he was always in the background and then pooff, gone once the rock disco / heavy metal bands broke onto the scene.

All in all one of the best smaller rallies for none but the hardened. The hardest went to the northern rallies, no southern Jessies here --- see the Rallymans Rally report.

The lady who ran the Severn Rally was known as Mad Liz Edwards. She was a member of the WD 66 club she had BSA A10 with sidecar and she did drive and was a great person to know. The chap with a greasy hat was Alan Lucas who ran the WD 66.

The chap with the M20 was George Underwood, "The Clampits" we knew him and his family as.

I attended most of these early rallies - the Snowman, Goose Fair, Robin Hood, 7, Stanford Hall, Aegir, Dragon and Elephant, Pre-Elephant, Tribute to Dragon - and ran one near Cirencester for 2/3 years known as the Border Rally.

Notts 41 would come along and maybe some of your lads.

Stopped rallying when the heavy music came in and the wacky baccy. Loved the traditional rallies, with the evening singing of Rugby songs. Brilliant.

As an ex Potteries Phoenix MCC member, I recall that we used to travel down to the TRMCC meetings on Tuesday nights and some of their members used to come to our meetings on Monday nights.

Some TRMCC members I can remember are Liz, Pete, John (from Walsall) and his brother. I last saw Pete at the Stella Alpina rally in Italy in 1994 and said that he was working in southern Germany.

I recall the 1973 Severn rally as being held on Guy Fawkes weekend and going to Bridgnorth on the steam train where there was a bonfire party going on. There was also things happening at all of the stations on the train line. A great weekend.

One of our members (Terry) had broken his left leg just prior to the rally and really wanted to go to the rally, even though his leg was in plaster to the top of his leg. So, one of our members extended the left hand riders footrest on his Triumph 500 5T to enable Terry to put his plastered leg on the outside if the riders footrest. Everything went OK till the rider (Les Dale aka Scammel) got a bit enthusiastic coming out of a roundabout and grounded the footrest and Terry's plastered leg showering me with plaster dust as I was following trying not to fall off my bike with laughing. They somehow managed to stay on the bike and carried on to the rally with no further escapades!

At the Severn Rally, on the Saturday night we'd had a skinful and on the Sunday morning we were hanging around like Zombies but one bloke was heating something up. "What's cooking, mate"

"Poached egg in bean steam", he replied. I looked in the pot; the beans were nicely boiling but in the middle was this egg looking like a yellow eye in the orange beans! I've never tried it!

Les is correct in saying in his introduction that the Severn rallies of the early 1960s were organised by the Wolverhampton Motor Cycle & Car Club; I am unsure as to the date of the first Severn meeting, although this badge proved the existence of a rally in 1967.
[Hover your pointer over the badge]

As further proof, here is the rally badge of 1968, which at that stage was still being organised by the Wolverhampton Motor Cycle & Car Club.