My friends Jim Ferguson, Karl Chadwick, Ray Palmer, Ronnie Hall (aka "Homer") and I left Belfast early on Friday morning March 1970. My bike was a 1966 CB450 Honda, Homer's was a 1968/69 350 Yamaha and Jim was on a 1967 250 Suzuki Super Six. I let Karl ride my bike part of the way and he dropped it on a right hander just south of Athlone. Holed the crankcase and bent some metal. We repaired it in a local village blacksmith's shop and carried on.

Got lost in fog (before GPS) but found Annascaul later that night. 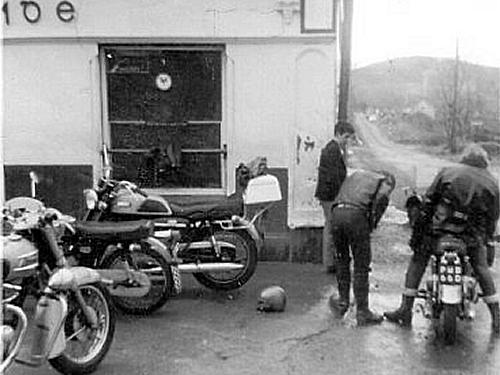 Friday and Saturday night are a bit of a blur. The local police and priest were in the bar both nights until the wee hours. 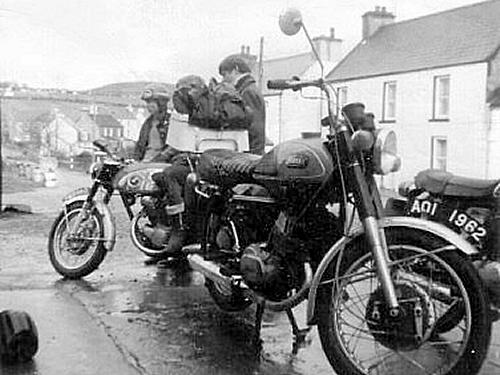 The 2 b/w photos were taken by Homer outside a bar in Annascaul. I have my back to the camera sitting on the 450.

The colored photo was taken at the 1971 rally in Ballyvaughn. I entered my bike in a Concours (the white 450) and came 4th. 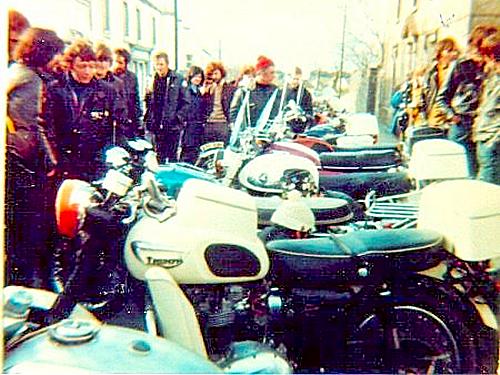 We left on Sunday morning. On the way home the chain came off the rear sprocket on a left hander and we slid ever so gently into a bridge just outside Kells. I knew the chain was "slightly" stretched but thought we could make it home. Karl and I walked and hitched-hiked until we made the border next morning, then got a lift all the way to Belfast. We went back to Kells the next week, equipped with new chain and retrieved the 450.

I moved to Canada, Jim (my best friend/Best Man) passed away 2008 in Belfast. Karl (we were in the same class in school) moved to England when he retired. I haven't seen Ray since 1972 and the last I heard of Homer (one of my favorite people) he was living in Spain.

I went to the Shamrock Rally at Ballyvaughn in 1971. I rode down in a group and travelled 225 miles from Dundonald in N. Ireland on a little CD 175 Honda. That was not the most comfortable as I am quite long in the leg, but at least I made it, although there was a few issues with it spewing fuel from the float chamber. Just a thing she liked to do now and again.

The group included Robert Thomson, Jim Ferguson, Homer, Bill Maidment, Ann Spindlow, Janette Maidment, Big Alf and can't remember who else. I was just 17 at the time at the time so this was a big deal for me.

From what I remember the grocery store and the bar were all in one building and it seemed like the place was just one Street. There was a get together in a Hall and I got a prize for the furthest travelled lady rider. It was a Dunlop yellow wet suit, jacket and trousers so I was chuffed with that.

One of the highlights was seeing the Honda CB750 4 for the first time and I'm nearly sure the guy was from Dublin and was called Joe Murphy. There was the usual alchohal consumption, banter you get in a group of bikers. Had a really great weekend.

I felt my badge was like a medal, but unfortunately after a few years it broke of my jacket and was lost. I tortured someone into giving me one they had but it was 1974. I know I still have it and a couple of photos at the Rally.