At last! By the time this rally came around, I had managed to get a leather jacket which was a lot warmer and more protection than the several jumpers I had been wearing under my Belstaff. I certainly needed the warmth this time as it was bl**dy cold.

Nothing of any note happened here on the Friday night, with most people spending a few hours in the pub in the town. The only problem I had was my 2-litre bottle of Pepsi freezing solid in the tent, next to me. But that didn't seem to matter to anyone else, so I didn't make a fuss.

Most of the activity during the games on Saturday afternoon seemed to be concentrated in the human pyramid building. Several clubs got up to three levels and I think the Bell MCC won it, but I'm not sure how they scored it.

Although the temperature was still firmly in the single figures, this didn't stop some of us buying ice creams from the van that came around in the afternoon.

Later on, the disco started up when enough people had made their way back from the pub and the party continued. There was a large communal bonfire which was well attended. While here I heard a member of one club saying to an interested party "Yeah, well, our club is a lot like the Angels, only we share the shotgun." I hope it was a joke.

It was an extremely friendly rally, shame it was on a very unfriendly weekend.

I cannot remember anything about this rally apart from it was in February and I must of gone to it! 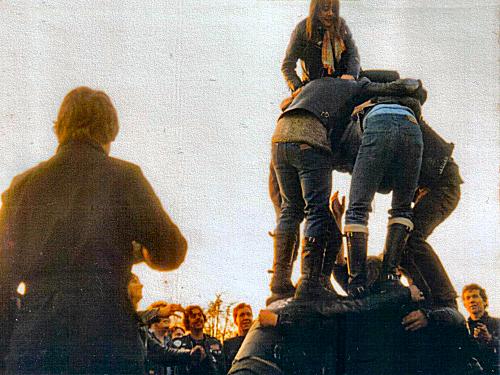