Or "It's not just the herrings that are pickled"

I had been to the rally in 1973 and it must have been a good do as I can't remember a damn thing about it and at that time I would have been on my BSA /Monza outfit, 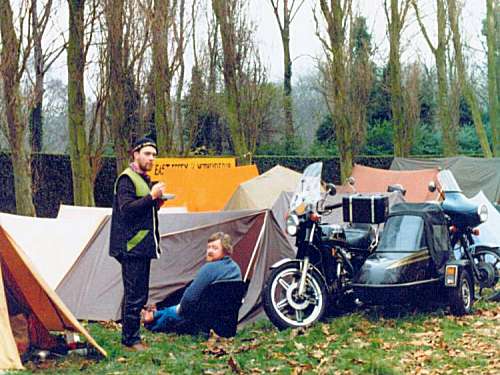 As always the rally was held on the weekend nearest to December 5th, which is when, in Holland and Belgium, St Nicholas distributes gifts to good children with the aide of Zwarte Piet (Black Pete). This is their version of Christmas. December 25th is a very quiet, religious affair.

1974 I was now mounted on my BMW R90/6 and I had been talking to Alan Dunnicliff about how good the previous year's rally had been, and how good the R90 was on petrol giving me 54 mpg at speed. So we arranged to meet up at my parent's house about 22.00 Friday night and ride over to Wednesbury, pick up Brian Burgess who was to be Alan's pillion on his Suzuki GT750. We pulled into the petrol station at Ocker Hill which was always the cheapest, and tanked up. The M6 J9 was soon reached and off we go.

The weather was freezing with frost on the ground and our speed kept creeping up and up. I got this feeling that Alan was following too close and urging me to go faster. In no time at all we were hovering around the 100mph mark. There was very little traffic around and next thing you know we were coming up to the M1. I backed off the speed to around 90 and eased the bike over and to this day I'm sure I had a two wheel slide! Alan came alongside and indicated that he wanted to call into Watford Gap. He wanted petrol and I wanted to check my underwear!

Soon we were back to 100mph touring and heading to London. The M25 was only a dream in these days and you had to go through the capitol. I used to get lost but Roger Halfyard had shown me the quick way; Hendon to Archway to Hackney to Blackwall Tunnel to Dover, road job done. Alan pulled over again for MORE petrol and we were now only 70 miles from Dover. On reaching Canterbury Alan filled the kettle AGAIN. I made a point of not filling at this stage of the game I was low but knew that I could reach the docks 204 miles still on main tank. Alan confessed on the ferry that he was going fast to try and make me use up more fuel as he didn't believe that I was getting that sort of mpg. He sold the Suzuki a short while later.

We took the ferry to Zeebrugge in the early hours and drove the coast road down to Oostend, followed the signs to the campsite a short distance out of the town and pitched the tents. What to do now? It's still early morning, let's try a drive up to Sluis, a little quaint village just over the border in Holland. I think most of the rallists have been there. I know Brighton Bob used to oganise camping weekends there. Still, back to the rally. The watering hole was a bar upstairs in a street just off the sea front. I don't remember how we got there from the camp site or how we got back but it was packed to the rafters and we had a good time. Strong English turnout. 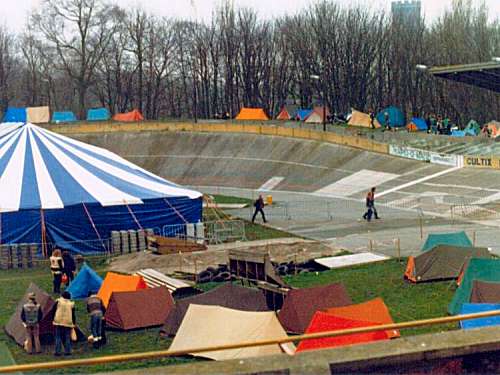 1976 I did the same run but with a sidecar fitted. The plan was not to camp but to do as a few others did and catch the midnight ferry back from Oostend to Dover and sleep on that. All was going to plan until a group of friends from M S C Koln turned up around 8pm and next thing you know I was drinking in two schools. At one point I had 6 beers and 6 shorts lined up! Needless to say my mates made the midnight ferry, I didn't. I was ratted good and proper.

Having missed the boat my pickled logic headed me to Zeebrugge. Damn good job the sidecar was on. I parked the bike on the beach, got the stove out to have somthing to eat and woke up four hours later 600 yards away not knowing where the bike was. The feeling of hunger clicked a relay and it all came back to me - the beach. Look at the time! Got to get a move on to get the 6am boat. Just made it and I lay down on one of the bench type seats and was out like a light. Shake shake "Come on mate, we are in Dover" Some kind soul roused me. I gathered my things and made my way down to the car deck. I looked around and around and around. No sign of the bike, oh dear!!! I could not remember bringing it on the boat. I was getting this nasty feeling of having to go back to Zeebrugge to fetch it, four hours there and another four back oh dear!! Just then I spotted a deck hand "you haven't seen a bike and sidecar have you mate?" "Yes, right down the back, last thing on behind that freezer van." Relief or what!

And what a careful ride I had home. I was still ratted and would have failed a breath test at 4.00pm 16 HOURS after my last drink. Be warned.

How to miss a ferry when you are already in Ostend? Easy. Go to the St Nicks.

I missed the early ferry and then was the last bike onto the next ferry after falling asleep again in the terminal!

I remember the MTO clubhouse (over a bike shop?) where some of the 70s rallies were based and the steep stairs up to it; yes I did fall down them!

The Bike parade around Ostend. (We usually watched from a Bar...) 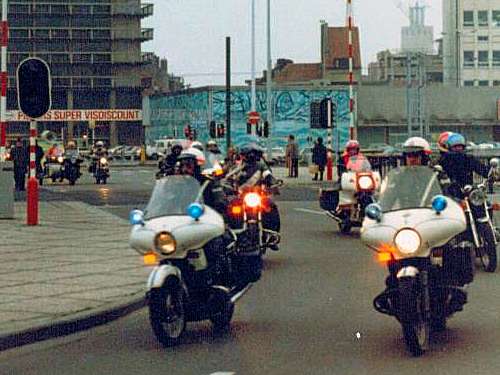 The ride down through London before the M25 was an adventure until I got a decent route to the Blackwall tunnel sorted out. We used to stop at a tea van in a square/car park near to the river (it was open all night.)

One year it was freezing fog all the way from London to Dover and when I got to the docks I couldn't get my helmet off because my beard had frozen on to the chin piece of my helmet! Thank goodness for hand drying machines!

I had a problem with fuel consumption one year on my Suzuki SP370 trail bike. The vibration had cracked the weld on the rear tank mount. Guess why I was feeling cold around the crotch area! Luckily it was on the way home and I wasn't traveling with any smokers!

I could write much more but I still see the culprits and, as it involves drunkenness and the red light district, I can't risk telling in case they remember what I got up to!

Argh! Bloody great days, cold, frost, hunger, blurred vision and those bloody cobbled Ostend roads! And the parade with the pissed up mayor!

I motored down from Warks, circa 74, 75, 76. I worked nights then, so we set off noon Friday for the late evening Townsend Thoresen ferry. Having docked at Dunkirk, we stayed at a friends appartment and rode the route from Dunkirk to Ostend with our Frog friends, about 6 in total.

In them days there was a border post France/Belgium. The guy must have seen or heard us, as he soon opened the barrier. We didn't bother stopping!

Into Ostend centre, onto death alley (cobbles). As I recall the rally was straight through the centre on the other side of Ostend.

Every extremity on my body was frozen stiff! The BMW wasn't handling either, probably due to the duty free booze in the panniers.

I remember the club above the shop in Ostend. Inside was warm and toasty. I think there were large log fires with hoods as I recall one Brit, throwing brandy on it to stoke it up, nearly setting fire to the club house!

I remember the mass ride around town and the cold run home! The rest is a bit of a blurrrrr. I think booze had a great effect on my brain cells.