Snowman Rallies were very popular rallies because no-one else went to them. What I mean is that they were held in the Peak District in the worst of the winter which ensured that only dedicated die-hards and total lunatics attended. Summer rallies attracted silly kids and old idiots. The Snowman Rally was for hard riding, hard drinking, loud singing nutters. Subtle. To make the point the badge was heavy metal black.

One year the badge colour was ...

The first Snowman Rally I attended was in '71 with other members of the Denholme and District MCC (Dave Pickles, Big Bill Harrison, Kevin and Graham, Willie Grayston et al) Anyone remember "Strawberry" the rally virgin? We told him to keep his wallet in a safe place like his underpants which he did, bless him. Only later in the chippie, short of cash, he dropped his pants to retrieve said wallet. The woman behind the counter went ballistic and we all pissed ourselves.

The following morning the effects of all that ale took hold and Strawberry made a spirited dash to the bogs only to halt a few yards short. We made him ride at the back on the way home.

Oh the badge? That was a nice shade of pink with a white snowman. 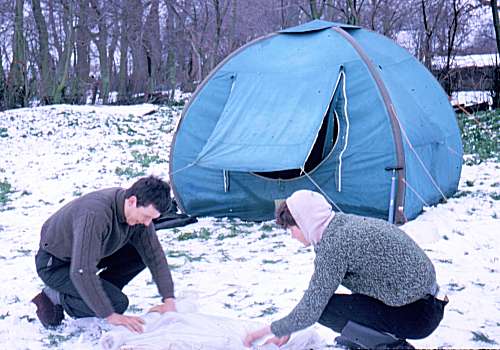 Clive Hodgkin and John Ashworth rolling up some snow to take home as a souvenir.

Now, at my age, having attended all the Aegir and Snowman rallies, they all seem to blend into one big drunken haze, apart from one Snowman that took place at the Bell Inn, Bishopbridge sometime in the late 60s or early 70s. Memorable because that was the only REAL Snowman rally I recall and took place with the site under 2 feet of snow and attended by a surprisingly large number of bikers who were hardy or foolish enough to make the trip.

Fortunately we had a very warm and welcoming pub to thaw out in and keep the obligatory burgers and cuppas just the good side of luke warm.

Friday and Saturday nights where, to put it politely, a little cramped and for the time of year rather cosy, sometimes maybe a little too cosy but all worth it.

Sunday was however very hard work for a couple of reasons.

Firstly, finding the bikes after another snowfall Saturday night and secondly, with an almighty team effort by Hubspinners members and a good number of our guests, we had to push, pull and drag almost every bike out of the field and onto the now snowploughed road.

Great memories and thanks for some great times to Jim and Bev, Jonno, Tees, Kiss, Shep, Dick, Snowwy, Babe, Col, Mick P, all others whose names escape me and all other rallymen (and women) who I have crossed paths with.

There is a report on the 1978 Snowman Rally in the Megaphone archives.