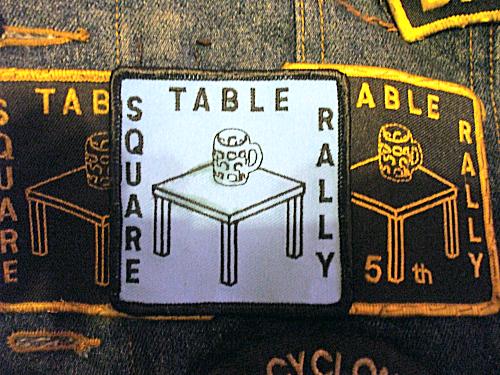 We (usually three of us, but the last two years I've been on my own) only do about three rallies a year but the welcome and laid back attitude of the Crew is so friendly, really an old fashioned friendly attitude, brilliant so much we keep going back.

Don't try the Spingo unless you have a strong constitution

We are old members of the defunct Legion MCC (1981/89) who still try to relive our youth and keep sane by rallying. The first three years Col was two up on his Suzuki 850 shaft 'n I was on Ethyl, a Honda 550f1 1977 vintage. The fourth year I was on Ethyl two. No, it's not a typo, I had to rebuild the 550 engine using another one off e-bay.

This year I went by George. As you may gather I tend to name my machines. George being a '02 650 Dragstar, an offer I couldn't refuse. Much easier journey for me but, as the Knights' chairman pointed out, it doesn't look the same not seeing Ethyl parked outside the tent. Ah well ...

The cricket club they use keeps the prices reasonable, 20p cheaper than my local but don't try the Spingo unless you have a strong constitution or sick of living. They also do food, but the club has a pasty run on Saturdays to a real Cornish shop. They arrive in time to eat while watching the games and are very filling - the pasties, not the games.

The rally's in September - just thought to mention that. Miss it and be square, geddit?

There are photos of Square Table Rallies on Lofty's Website.