One of the best summertime rallies of the early 1970s, very popular and well attended with up to 400 people signing in. Well the good weather always helped swell the numbers.

The smoke from the headlamp was from the gearbox via the speedo cable.

Awhile back someone mentioned the Stag Rally and who organised it and we were a little unsure but it can be confirmed now as the Mid-Anglia Rally Group headed by George Cousins and Trevor Peach.

My earliest recollections date back to the 1970 event. I set off Saturday afternoon about 2 O'clock on my BMW R69 full of excitement. My friends had left earier in the day with the tents and other luggage. This was to be my first outing on the BMW since blowing the engine up the previous summer. I got onto the A5 and turned the wick up. There was 100 miles to cover and the weather was good. I was just coming to the end of the Atherston bypass when I noticed some strange vibration and noises. I turned around and started to go home, then I lost the drive. I stopped at the side of the road and stood there scratching my head trying to figure out what was wrong. The oily smoke coming out of the headlamp had me worried. Just then a police patrol car pulled up and told me that I could not stop there. I told them that I had little choice and that I could go no further as I had broken down. They said that they would get me help and shot off without noticing that I had no road tax! A while later they came back and said that help was coming, but not until after 5 O'clock when the bike shop closed.

Shortly after 5 a mini pick up arrived and we struggled to get the BMW onto the back. With nothing to tie it down I sat in the back holding the front brake on as we drove steadily back to the bike shop in Atherston. Talking with the bike shop owner as we unloaded the bike and got it into the shop, it turned out that we had a mutual friend, Brian Wall the Velocette dealer in Wolverhampton and that he had a mechanic who lived near to Wolverhampton so he could drop the BMW off at Brian's shop for me on Monday evening. What a stroke of luck! And as he was late for his evening meal, where was I going now? He kindly dropped me off just close to the A5 where I could hitch hike home. I grabbed some chips at a nearby shop and noticed a miners welfare club. Well I may as well have a quick one. As I sat there pondering my fate I thought that there is little chance of my getting home as it was now half past 7 ... I had another pint and thought about my mates at the rally ... I deceided that I would walk in the direction of home and at some point I would get into a field and grab some sleep. As it got dark I found a field and got comfortable. I had a small rucksack for a pillow and an old army blanket. About midnight the first drops of rain woke me and I sought shelter under the bushes where I sat until dawn, helmet on and wrapped in the blanket getting wet. Around 6am I got back on the road and after a while got a lift, eventually getting home around midday. The fault on the bike? The input shaft bearing had collapsed and the two cogs looked as though they had been flame cut. The smoke from the headlamp was from the gearbox via the speedo cable.

So the Stag Rally 1970 was the first rally I never got to and the 1971 was the one I never intended stopping at.

Motor Cycle Weekly came out on Wednesday and there were two rallies listed; the Stag Rally and another, the name of which I have forgotten, in Oxfordshire. That was the one I intended to go to. So Saturday morning I set off on the BMW R69 and arrived mid morning to find the event was not a rally as such but a steam fair with traction engines! What a bummer. As it was still early I had a quick thought - I could get over to the Stag Rally but I didn't have the address with me. As i drove home it crossed my mind that if I diverted to Coventry I could pop into the Antelope Club and they might have the Stag Rally details there, which they did. So I had a pleasant ride out to Bythorn and as I crested a hill there was the pub and tents laid out before me.

I signed in and had a pint. The weather was fantastic, really hot sunshine. People were sitting on the grass and on the floor at the back of the pub which is where I finished up, chatting with Dave Wood, Alan Giddens and the rest of the lads for a while. Then it was time for me to go, "No! why don't you stop here?" I explained that I never intended to stop anyway and that I had no gear with me, no tent or sleeping bag. "Don't worry about that, we'll get that sorted stop here." Sure enough a blanket was offered and a place found in a tent, so I finished up stopping and had a great time. 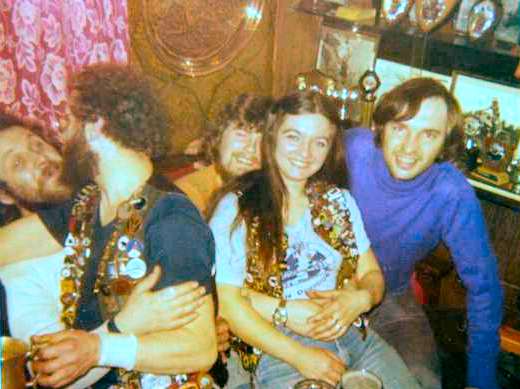 When it was time to go back to the tent, the lad I was sharing with said "Fancy a bite to eat and a coffee before we turn in?" Why not? A stove was produced and a pan of water boiled with boil-in-the-bag kippers. Kipper sandwiches are OK but coffee made with the same water tastes of plastic and kippers and can't be recommended.