The Sundowner Rally is an invitation only rally organised by Chiltern MCC.

It's about meeting up with old friends.

Most of the ones I have been to were at Sharpenhoe to the North of Luton, but for quite a few years now the site has been near Stevenage. I am not sure just who is actually in the Chiltern MCC now, other than Alison Downing and Henry, and John and Caroline Flitney, but various UFO members etc seem to help out.

At Sharpenhoe the camping was at a farm site across the road from the pub. There was a marquee which also had a (very!) late bar. The disco in there was unusual to say the least! 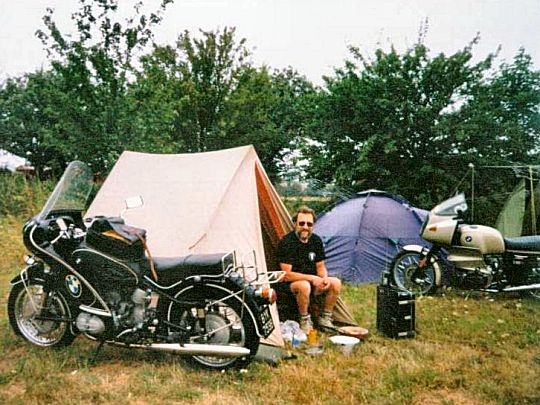 Paul Mullis who by then had inherited Steve Cawthorne's old BMW. Ted's RS in the background
Heather MacGregor

Every year there was a contest to see who could bring the worst record for the DJ to play. I think the worst one ever was a song about a dog. "Fluffy, where are you?" You had to hear it and the choir (who after a few years knew most of the words!!!) to really appreciate it! 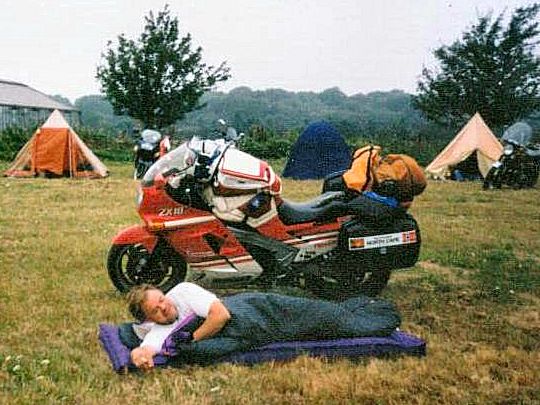 Mick Breese at the same rally - so hot he didn't bother to put his tent up till after he'd got up on Saturday!
Heather MacGregor

Saturday afternoon was the time for silly games on site and watching a group of bikers playing musical chairs was very silly! The raffle on Saturday night traditionally has alcohol based prizes, with some very exotic bottles up for grabs.

More about the Steib

In 2008 I had arranged to meet up with Heather MacGregor to bring together two of Paul Mullis's old bikes; Their outfit "The Beetroot" has recently been restored by her husband Keith to a high standard, and I am running Paul's old R80 in a more "unrestored" state.

Barry Carter's Panther with rabbit. I have another pic of this rabbit at Brighton Bob's dirty weekend, when it was getting down and dirty with an inflatable woman called Sandy.... Ted remembers her name - should I be suspicious?
Heather MacGregor

As usual there was a Real Ale bar and an assortment of food available on site, or if you preferred there were plenty of pubs available locally, although at a much higher rate for the beer and food! The weather was kind to us and the club provided barbeque facilities on the Saturday evening which were much appreciated.

The only disadvantage for me to go to this rally is that the only sensible way to get there from Bradford is via the M62 / A1. All the alternative back road routes take a lot longer, and tend to be routes I use frequently anyway. However rallies are not always about the ride there, a lot of the time it's about meeting up with old friends, and fortunately that is guaranteed for me at the Sundowner so the motorway run is worth it!

Alan Bone on the Sunday morning at the Sundowner 1994. He seems to be unwilling or incapable of summoning up the energy to ride home, something to do with the night before maybe? Happy Days
Heather MacGregor

This rally is held by the Chilten MCC in July in the Hertfordshire area in a small club in a village with 2 pubs. The camping area is large and by the side of a rugby pitch.

The entertainment is held in the club and a decent range of drink is available with local real ales.

On Saturday evening the club put on a bbq and they cook your meat for you. On Saturday I was going to visit the Shuttleworth collection which is nearby but ended up going to the pub instead.

A nice quite type of small rally which I must get round to doing again.