The Rally is based in the village hall now, and the Mercury Club members run the kitchen there providing free tea and coffee and reasonably priced meals and breakfasts.

I gave him quite a fright when the whole world lit up for a few seconds as I passed him at over a hundred miles an hour.

Better still they have a Bar and sell bottles of beer at prices cheaper than I can buy it in my local supermarket!

The hall has a stage and they usually have a Disco on Friday night, with a Band on Saturday.

Of course you can still use the pub, which is next door to the hall. They provide all the usual things you need at a rally, beer, more beer, and a large range of Scotch whisky (they do food too!)

The Camp site is quite large, but tends to fill up quickly. Lots of people seem to make the effort to get there Friday and make a full weekend of it.

There was a full range of bikes on site, with some very nice sidecar outfits, a neat little trike and what I suppose classes as a Quad bike, but its getting a bit close to being an off road car!

You don't need to be on a big bike though, a Honda 90 will do the job too.

The cruiser class was well represented. I struggle to spot the real Harleys these days.

It doesn't seem that long ago since I went to a camping weekend at the site to check out with Jim Twaddle and a few of the Mercury Club to see if the pub could cope with a Rally. I never thought I would still be going there thirty years later.

In the old days control was in a room behind what was then the village post office. (now the bungalow to the left of the field entrance). When the licensing laws were a lot stricter it was a good place to have an after hours drink. The raffle was always held in there late Saturday night, and sometimes into the early hours of Sunday, it always seemed to last forever and things could get a bit wild when people were getting fed up of it. 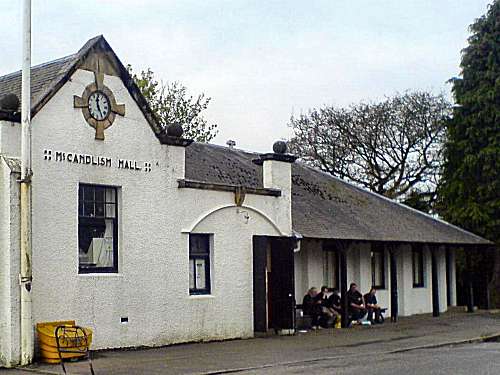 All kinds of things have happened at the Rally over the years; Alan Gilmore even got married there! It's in a good place for rides out into the Scottish countryside, but I still seem to always end up visiting Girvan for some reason.

There are a lot of good routes to get to the site too, and I have had some memorable rides, particularly the last sixty or so miles.

One year I went on the Goldwing / EML outfit I had then, I couldn't get away from home until after five on the Friday, so it was a race to get there early enough for a good session! The road up from Castle Douglas towards Ayr has some nice long fast straights, but when its dark up there its really dark. This was no problem for me because I had fitted a matching dipping H4 headlight to the sidecar, but halfway along one of the long straight bits I could see what looked like a glow worm slowly making its way to the rally, it was a chap we knew as "Hovis" on a 125 MZ. I gave him quite a fright when the whole world lit up for a few seconds as I passed him at over a hundred miles an hour. He said he looked in the hedgerow at every corner after that for the wreckage, he didn't think I would get there going that fast on such roads! I took him out in the chair the next day, and frightened him even more, some people never learn!

Of course now there is a speed limit of 60 on single carriageway roads so I just take my time and look at the scenery ...