I can't remember who talked me into going, but they certainly started something! 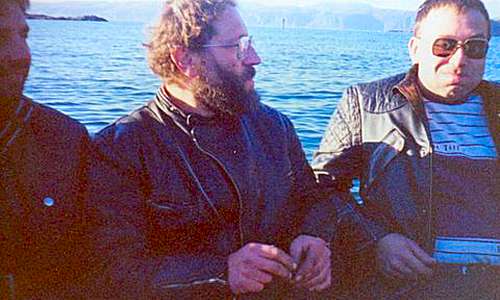 The early rallies were held near Ardfern (on the west coast of Scotland south of Oban). The rally site was on the estate of the Laird of Lunga, an impressive title and anyone who met Colin Lindsay-MacDougall (the Laird) could not fail to be impressed by the seemingly endless numbers of beautiful young female friends he seemed to have!

I seem to remember being plied with large amounts of whisky the ownership of which, we later found out, was dubious.

For the first rally we had the use of several rooms in an old cottage on the estate, and a large muddy field to camp in. Several friend and I commandeered a bedroom, and as it had a convenient fire place, lit a coal fire, found some old tables and chairs and settled in for a private drinking session! The Mercury Club were running their own bar which, as the night wore on, became more and more chaotic! They keep things much more organised nowadays! I seem to remember being plied with large amounts of whisky the ownership of which, we later found out, was dubious. 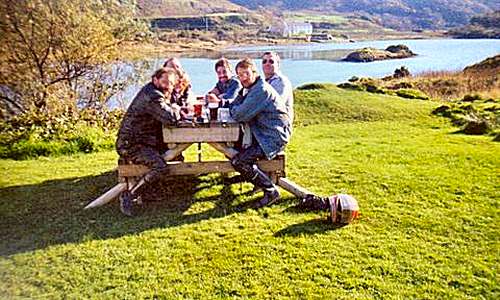 Two of the guys at the front are no longer with us. Paul Mullis (heart attack) and Steve Cawthorn was hit by an emu in Australia which brought him off his bike and killed him. The news headline was "WORLD BIKER KILLED BY OSTRICH!" Very sad, he was a great bloke, as was Paul.
Dave Honneyman

Access to the site was up a dirt track which went from Ardfern over a hill then steeply down into the Lunga estate. Did I say "dirt" road? Well it would have been if not for the rain. It turned into a mud bath, no fun in the dark after a 260 mile trip in the cold and wet. For the more intrepid rallyists you could walk back over the unlit track to the Galley of Lorne Hotel in Ardfern.

Does anybody else remember Roxanne the Bikie?

Later rallies at this site used a barn as the bar and rally control and we were treated to live music on the Saturday night. Does anybody else remember Roxanne the Bikie? She was the singer for the band and was, shall we say, a rather large girl! She owned a Honda monkey bike and when I first saw her riding it up the track I was most impressed with the bike's performance, especially as it looked from behind to be fitted with a huge pair of throw over panniers! 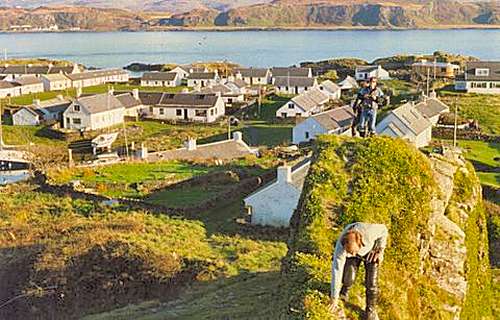 The one constant thing about the early Tartan Rallies was the guaranteed bad weather. Sometimes torrential rain all weekend and sometimes hurricane strength winds and sometimes both at the same time!

It's a bit late to talk about a special badge for the 30th Tartan, as this year (07) will be the 34th! Its still a brilliant weekend. Good Fun, Good Beer, and above all Good Company.

Still got the Antler badges to 1977. I would have been 17yrs in '74. I lived in East Kilbride. My pal John and me would have bungee'd on our crap tent (read leaky), some cans of food stolen from mum's kitchen. Away we'd go, rattling up along Loch Lomond and on. Those days there was no bridge at Ballahuilish (for Antler rallies), so throw tent over a fence beside road and camp up. There was never a chance of us reaching the ferry in time at Ballahuilish, especially the first year where I would have ridden a Honda CB125, my mate on a Yamaha 125 (2 stroke).

Happy, wet, drunk days, running on nothing but a hangover and some great fun with people on the rallies. Half cooked burgers, warm beer, wet boots all weekend, the lot. I'd probably die of hypothermia these days.