Les Hobbs explains how he kidnapped a fellow rallyist in reverse. 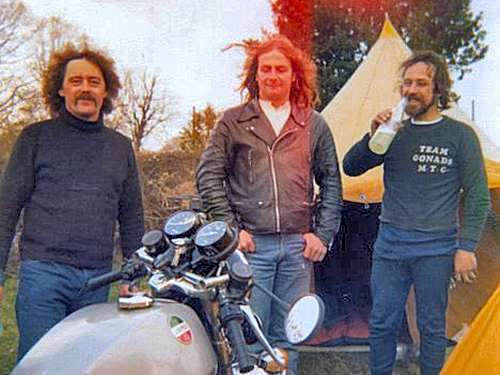 I don't remember too much about getting there apart from the fact that it rained most of the way. I was on my R90/6, the same bike I had been to the Antler Rally on but now it was fitted with an S350 Steib sidecar [I bought the sidecar from a chap in Kent it was painted 5 different colours and the boot floor had rusted away but Steibs handle well].

The front mudguard had fallen off and the exhaust had broken just by the cylinder head.

I remember arriving late. This was my second visit to Scotland. It's one hell of a way from the Midlands and the first person I met was Jim from Lozells, Birmingham. Jim was older than me and had been to a fair few more rallies than I had done and he was there nearly 500 miles from home on a Suzuki 80cc as he explained his BSA B33 outfit that he normally rode had been stolen and this was all he had to use. The front mudguard had fallen off and the exhaust had broken just by the cylinder head. A small amount of fence wire was holding it roughly in place. It had taken him 20 hours to get here. 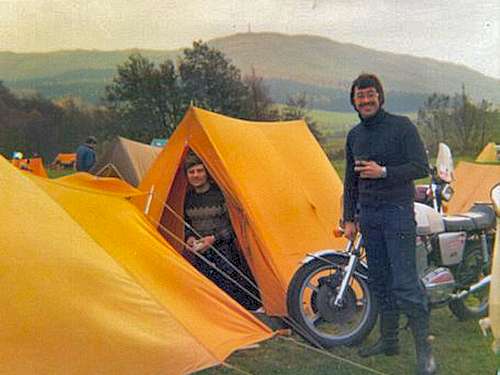 The organisers said that if you didn't want to put your tent up in the quagmire that was passing for a field then you could crash down in a wooden shed, or rather hut, at the side of the field. A fair few of the lads had camped but Jim and myself went for the safer option, the hut. It was warm and dry.

I was trying to get Jim to abandon the little Suzuki

The evening was spent drinking beer in a hall with all the normal rally things going on and most of the evening I was trying to get Jim to abandon the little Suzuki over the hedgerow and come back with me but he wouldn't have it. I woke early the next morning with the normal thick head brought on by strange Scottish ale and I took the battery off the Suzuki and placed it in the sidecar, I drained the petrol tank into the BMW and went back to the hut to have some breakfast. 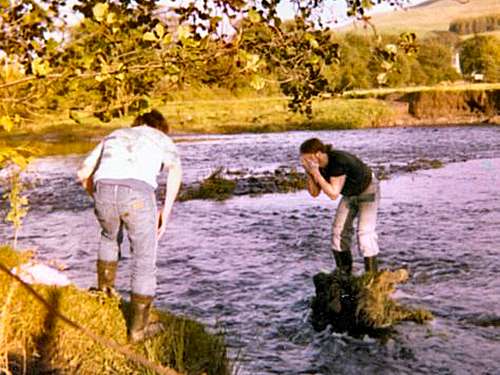 With something solid inside it was time for the return trip. I made one last attempt to get Jim to leave the Suzuki but he wouldn't "I need it to get to work." So I folded the pillion foot rests down and said "You're coming back with me, but before we go give me a hand to chuck this bloody Suzuki on top of the sidecar."

It only took us 11 hours to get back.

We tied it down with bungees and whatever we could find and off we went. Once we got onto decent roads I opened the BMW up and started to cruise around 95mph. I don't think that Jim enjoyed the return trip but it only took us 11 hours to get back. I dropped him off in Lozells in Birmingham with the Suzuki and I can't remember if I saw him at another rally.