Held on the last week in January

This year the trip over the M62 was a good bit more interesting than usual. A couple of weeks before, on the way to the Frozen Bladder Rally my winter transport had broken down. Well I say broken down, this is a bit of an understatement.

After many years and well over 100,000 miles of hard rally use one of the exhaust valve heads decided to drop off! As you will realise this causes some clearance problems when the piston comes up on its next stroke. It got over this by destroying the piston crown and disappearing down into the sump, but first it put some beautiful semi circles on the cylinder head, damaged the bore, and went across to the other piston and broke part of the skirt away.

Oh well that is one of the joys of running old BMWs.

It took me a while to gather the parts for the re build so what could I go to the rally on? Fat Barry came to the rescue; he offered to lend me a bike. I had a choice, a Suzuki Intruder 1400 or a Yamaha Majesty 250 scooter. Obviously I went for the scooter.

I had never ridden a scooter before, and it seemed quite lively, even with all my camping gear loaded on it. But then for the exciting bit there was quite a cross wind on the motorway, and I found it difficult to stay in one lane especially when I foolishly passed a couple of artics!

Other than the expected mickey taking when I arrived at the rally all was well. I just stuck the scooter out of sight behind a couple of trikes!

On Saturday we went to the importers of Boom trikes for a look around, and were impressed by the quality of the trikes and quads there. I am not sure that you actually need a 5 litre supercharged V8 with 500BHP to power one though.

As usual at the rally the cheap meals and the mini beer festival all went down well.

The singer with the band on Saturday evening could certainly belt a good tune out and she did some good covers of Janis Joplin. 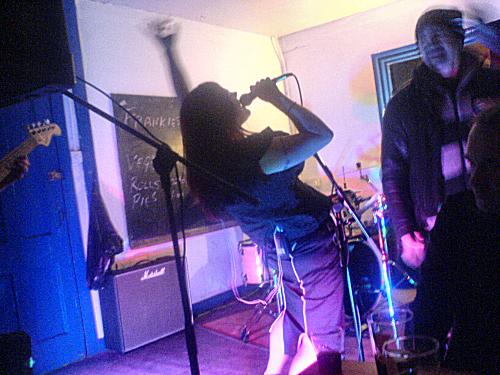 The only real problem was caused by the snow we had during Saturday night. On an auto scooter you have no clutch control. It does as it pleases, I left the rally in speedway style, not because I wanted to, but when you shut the throttle the clutch disengages, when you open up again away you go - on ice and snow sideways!

My apologies to the Harley Sportster rider that I overtook getting to the main road, but according to Roy Watkinson who was following me the series of broadsides I did on the way there was quite impressive!

I did over 70 miles on the scooter, and used 4 litres of petrol, that is cheap transport, but I don't think I will rush out and buy one!

Many thanks to the Timewarp MCC team for another excellent Rally.