I could imagine the reaction of some Danish Outlaw Biker if he saw me pushing his bike away!

I can't remember the exact site, but it was in the Thy region, to the North West of Jutland (Denmark).

I was on holiday with Len, Marita and Laura Tempest in August 1992 and, on the way back from Berlin, we had decided to include a Danish Rally in our tour. Len was on his Gold Wing / EZS outfit and I was on my BMW R100/RS (I still am!!) We had no idea what to expect as we got the address from the Swedish Rally calendar. 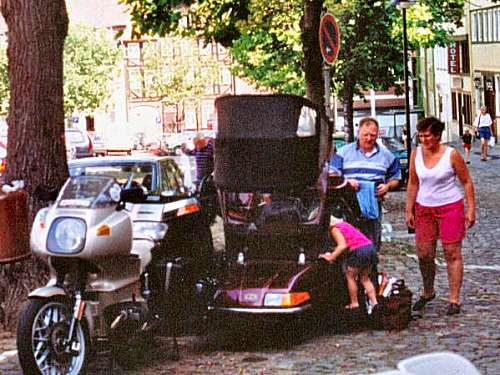 We arrived about lunchtime on the Friday of the rally and, after a few problems finding the site, we arrived at a large field where a huge marquee was in the process of being erected. Other than the organisers, all of who were busy setting things up, there was no body else there.

We were shown the main camping field and we picked a nice shady spot at the edge and started to put our tents up. "No! No! No!" a large Danish biker came across and told us not to camp near the edge and to move more into the middle. As he did not speak very good English and we didn't speak any Danish and the field was empty you can imagine our reaction, but he was determined that we should move so we reluctantly moved a bit further into the field.

Friday night was spent in the marquee and the organisers explained that no one usually turned up until Saturday. We had a great night, struggling a bit with the language, but that got easier the more bottles of the specially brewed for the rally Thy beer we drank. The only thing was that all the people there other than us appeared to be wearing some kind of back patch or other, but they made us very welcome!

Saturday morning, after a leisurely breakfast, we decided to go out for a tour round the area. 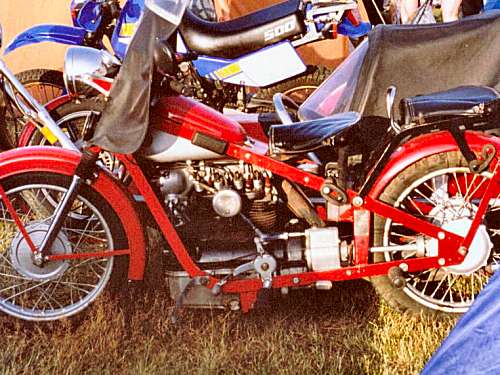 When we got back to the Rally everything had changed!

There were literally thousands of bikes, (mostly Harleys) and people now on site and it looked to be almost impossible to get Len's outfit back anywhere near his tent. We worked out a route and managed eventually, with people moving guy lines etc, to almost get there. The only thing was this Harley Chopper was right in the way. No one seemed to be about and Len said "Just wheel it out of the way, let me through and then put it back." I know that I don't like anybody to move my bike, so I could imagine the reaction of some Danish Outlaw Biker if he saw me pushing his bike away! I got away with it but I was crapping myself!!! 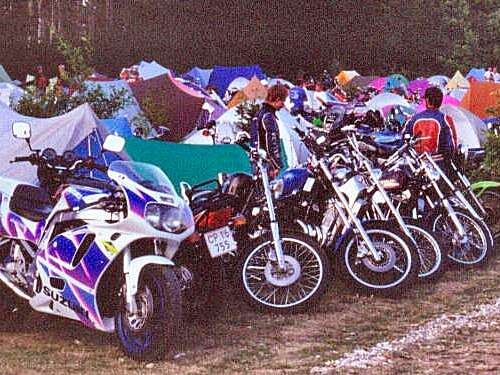 Due to the high tax on bikes in Denmark, there were lots of immaculate older Japanese bikes on site, and one or two real Classics.

Saturday evening was brilliant, with a couple of live rock bands on stage, and a great atmosphere in the marquee. I got to dance with lots of Danish biker chicks, Well, I have to admit that I was dancing with Laura Tempest and, as she was about three at the time, lots of the girls found it fun to join in with us!!

Later on we found out why we had been moved from the edge of the field. As you can imagine, several thousand people all drinking lots of beer all need somewhere to get rid of it again and in most cases this was where they went. As quite a few were incapable of getting back to - or even finding - their tents, this was where they finally collapsed and spent the night!

So despite being the total opposite to the type of rally I would normally attend we had a great time.

We were invited to several Outlaw Club Houses, which had accommodation and camping facilities. Unfortunately, as we were heading south again after the Rally (Legoland for Laura and Ringkobing Fjord for me!), we were unable to accept. I think that the clubs at that time were government sponsored and they all seemed to have impressive facilities.

We did spend a couple of nights on a Biker only camp site to the southwest on our way home.