Up Your Pipe Rally

There was only seven Up Your Pipe rallies five at the Sailing Oak (Camping area now a car park I believe) and two at the Red Cow (not a very good site, Pub now closed).

One of the Sailing Oak Rallies it was heavy snow and another one was very cold.

I tried to hold it to the nearest weekend to the 13th February.

Now help with the Mayflower Rallies. 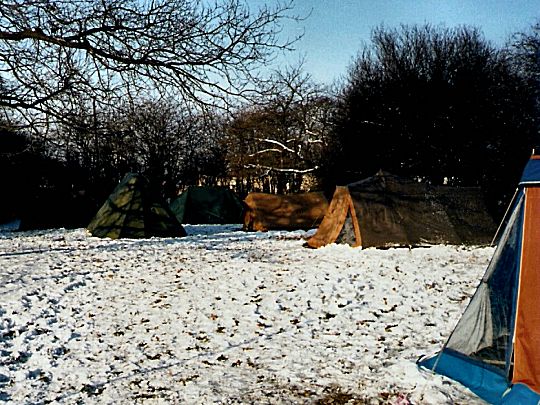 Radar's Up Your Pipe rally 1985 was held from 8th to 10th February at the Saling Oak, Great Saling. It wasn't one I was booked on but big Mike Mather had been involved in an RTA a few days before and none of the other Twits were due to attend so I went in his place.

On the journey there on the Friday night I remember my fingers being so cold inside the winter gloves and overmitts I had to stop periodically to warm my hands on the downpipes but I don't think the snow had set in at that point - that was in store for Saturday! Lots of people arrived on Saturday festooned with icicles.

For the journey home to west London I travelled part way in convoy with a few of the Mayflower I think. The M11 hadn't been my outward journey but it was deemed a more sensible route home, after all motorways got gritted didn't they? Wrong. It was closed. But we ignored the closure signs and continued, a detour not being an attractive proposition. Apart from that at least on a motorway you shouldn't meet someone travelling uncontrollably in the opposite direction. Just as well I wasn't travelling alone because I threw the Tig down the road. No way I could have picked it up by myself, the M11 really was a skating rink.