The 2009 Woodthrobbbers Small-End will be memorable for a number of reasons. (It said Woodthrobbers on the invite.)

A good venue handy for the town. Excellent weather for camping & an onsite burger van.

For identification purposes everyone was issued with a large bright pink wristband. 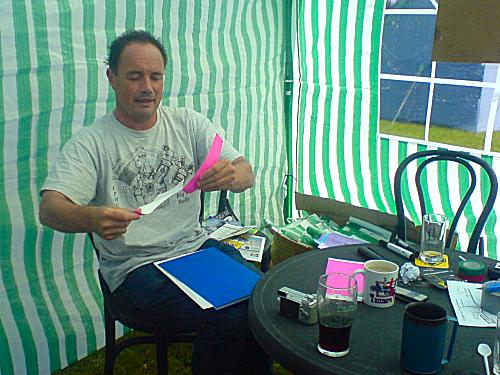 I know that women don't normally shave, but keeping the beard was a bit of a mistake.

Nigel had asked the venue to make sure that they had plenty of beer. Unfortunately he had not noticed that a large proportion of rally attendees prefer hand-pull beer to keg or lager. The two good hand-pull beers ran out at about 9pm on the Friday night leaving only the Worthington, which some said appeared to be past it's best.

Maggie McNeil & I went into town on Saturday. We spent time perusing the shops, market & the castle/war memorial gardens before heading for JD Weatherspoons for a drink & some food. The food was very good but £1.45 for a small coke seemed a little over the top.

Also in Weatherspoons was a group of rallyists along with birthday boy Brian Weekes, his grandson, Barry Carter, Alan Gilmore & Ray all sporting items of ladies clothing. Brian looked particularly outstanding in black bowler hat with black feather trimming. His dress was a scarlet flamenco number worn with a black feather boa to match the hat. The whole ensemble finished off with rather tasteful red satin shin guards, black leather boots, tattoos & the large pink wristband.

I am afraid that Alan Gilmore made an unconvincing lady. I know that women don't normally shave, but keeping the beard was a bit of a mistake.