Back in 1933 the National Rally was called the All England Rally, and was a navigational challenge for road riders who liked to explore the capabilities of themselves and their bikes. But the manufacturers of the day were the real beneficiaries as they tried to prove to a demanding public the reliability of their products.

It was obviously an important event for Britain's motorcycle manufacturers

Riders are asked to navigate to visit some of the over fifty controls dotted throughout the length and breadth of England and get their rally cards stamped by volunteers from motorcycle clubs, youth organisations and even church groups. Early on the Sunday morning most riders finish at the Final Control. There they enjoy the camaraderie and spectacle of up to 2000 tired but elated competitors swapping experiences whilst enjoying a huge well-earned traditional breakfast.

Peter Hooper a National Road Rally enthusiast was surprised to find a programme of the 1934 Rally for sale on E-bay. He promptly bought it. The Official Programme and Handbook of the second National Rally for Motorcyclists back then was priced at four pence. That's four of the old pence when there were 240 to a pound. It was held on the 7th and 8th July 1934 with the Final Control at Donington Park. The whole of the profits were to be devoted to charity.

In the programme's foreword an imposing looking T W Loughborough - the Secretary of the Auto-Cycle Union that organised the rally - stated that after the first National rally held in 1933 it was decided that a change of venue was desirable and Donington Park had been chosen. The programme of events had been compiled with a view to variety and attractiveness. And what a fascinating programme it was.

There was a motorcycle football match of 20 minutes each way, between Bayswater MC in the white jerseys and Chester MC in black. The winning six-bike team was presented with silver medals. Would modern health-and-safety regulations allow such fun today?

After that the motorcycle gymkhana commenced with events open to all. The reverse race, for solo machines only, had an entrance fee of 6d and required competitors from a standing start to push their machines backwards with engines dead for a distance of 40 yards. The winner of each heat was transferred to the final where the eventual winner was awarded a five gallon drum of Castrol XL oil.

The obstacle race was open to solo motorcycles only. At the word "Go" competitors had to start their engines, proceed to a pegged down net 30 yards away, crawl under the net, remount machine, ride over a balanced plank 30 yards away, make three circuits of a small staked out circle, carry on to a row of buckets, park machines and extract an apple from the bucket with hands behind backs, remount and ride along a ladder and finish.

The egg and spoon race was for lady pillion passengers on solo machines who had to carry an egg and spoon in each hand. When an egg was dropped the driver had to stop until the passenger had regained the egg. There were trick riding exhibitions by "The Ariel Troupe", musical chairs and lots more besides.

Three races provided excitement where competitors, from a massed start, had to ride 5 laps of the 2 miles 1,000 yards circuit. The first race was for 350cc solos, the second for sidecar machines with unlimited capacity and the third for 500cc solos. The list of names of the competitors' machines make nostalgic reading. Norton, Velocette, Sunbeam, New Imperial, Douglas, Brough, Vincent HRD, Triumph, Enfield and Rudge. There was not a foreign manufacturer represented! The prizes for each race were £10 for first, £6 second and £4 third. How times have changed! 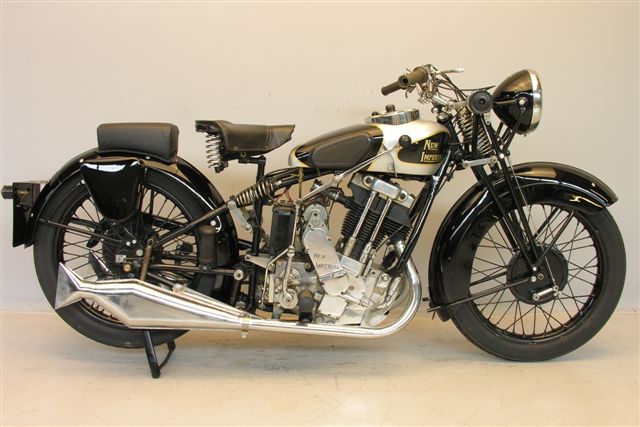 The programme's advertisements provide evidence of a long lost age. A magnificent new 350cc New Imperial cost only 38 guineas, or 44/6d monthly on terms. That's just under £40 for the bike brand new or £2.22 a month. No wonder it was described as the best value of its type in the world. You can't go wrong with a BSA another ad urged. Prices for new models started at £29-17-6d and all were equipped with modern electric lighting - not gas lights powered by carbide that were still around in those days. A Norton, the world's best road holder could be bought for £49.15/- whilst an OK-Supreme 250cc Flying Cloud could be bought for £8.16/3d down - including comprehensive insurance - with the balance payable over 12 or 18 months. A new 1934 Montgomery with a 250cc JAP engine cost 29 guineas whilst a Coventry Eagle that was absolutely complete, cost 36 guineas. Happy days?

But it was the All England Rally that took pride of place. It was obviously an important event for Britain's motorcycle manufacturers who wished to prove the reliability, comfort and speed of their machines and presented prizes to their amateur riders who achieved the greatest number of mileage and control marks. For example Ariel and OK-Supreme Motors Ltd presented a silver cup, Francis & Barnett Ltd a Jaeger trip speedometer, the Morgan Motor Co Ltd that still made three-wheelers - a clock, and the successors to Rudge Whitworth Ltd a cigarette case.

After starting on the Saturday and riding through the night, entrants in the All-England Rally had to check in at the Official Park adjacent to Donington Hall itself between 9:00 and 11:00am. A maroon was fired at 11:00 to signify the closing of the check-in in preparation for the count of clubs under the supervision of Mrs Doris Taylor the Honorary Secretary of the ACU's Midland Centre. Special tests were held at mid-day.

The list of controls, totalling 135 in all, showed they were spread throughout the length and breadth of England and Wales - from Aberystwyth to Norwich, from Penzance to Berwick-upon-Tweed plus lots of places in between. The importance of the rally to the motorcycle trade was emphasised with a massive 108 of the controls being located at dealers.

Frank Carter Deputy Chairman of the Auto Cycle Union the organisation that still organises the rally in collaboration with the British Motorcyclists Federation is in charge of this year's event. He emphasises that as well as modern high capacity machines, he wishes to encourage riders of scooters, mopeds, small capacity bikes, three wheelers and of course vintage. There are rally categories for every type of two or three wheeler. He remembers one competitor who rode a Honda step-through and entered it in the Special Gold category. The organisers presented him with the Spirit of the Rally award.

If this article has whetted your appetite to consider entering one of the great historic events of the motorcycling calendar why not find out more? Visit the Rally web site www.nationalroadrally.co.uk and click on "Rally Summary." Alternatively e-mail the Rally Secretary Alison Devine, telephone her on 01788 566409, or write National Road Rally, Auto-Cycle Union Ltd, ACU House, Rugby. CV21 2YX.

Finally, if you need an excuse to enter the Rally - why not get sponsorship and ride in aid of Mencap the leading UK charity for people with learning disabilities and their families? In recent years our riders have raised over £131,000 for this wonderful cause.